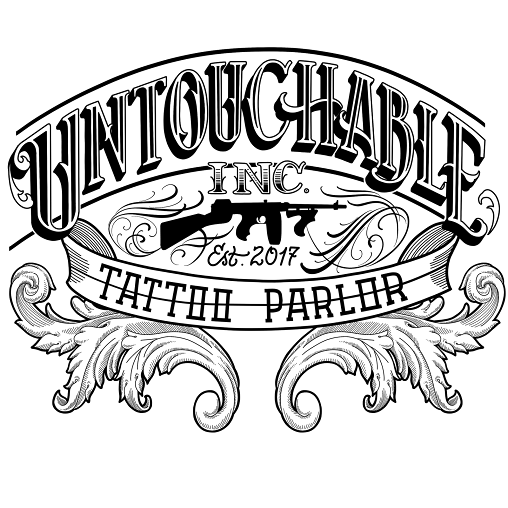 You will be able to see all the opinions of real people who purchase the services and products of Untouchable Inc. Tattoo Parlor (Tattoo Shop) around Pennsylvania area.

As of day the business has a rating of 4.8 stars over 5 and the score has been based on 48 reviews.

As you can read, it has an average rating is virtually the best one, and it's founded on a very large number of reviews, so we may say that the score is very reliable. If many people have bothered to give their score when they are pleased, is that it works.

You know that we do not usually stop to put evaluations when they are good and we usually do it only if we have had a problem or issue...

This Tattoo Shop belongs to the category of Tattoo shop.

Where is Untouchable Inc. Tattoo Parlor?

Love this place! All of the artists are wicked talented and the shop is so clean!

One of the best places in Indiana to get a tattoo. The people there are experienced and qualified.

Loving it so much they do a very good job

If you don’t know Matt Wright you have been living under Indiana’s largest rock!!! Matt isn’t only the best tattooer in Indiana, he’s the best in the state no you know what I’ll say it — the best on EARTH. If you want a tattoo better than Matt Wright’s work you better pack your bags and head to the moon buddy!!! Although you probably won’t find it there either. Matt provided me with outstanding service & the most beautiful flower tattoo in all the land. In fact, his work was so inspiring, I decided to plant a garden of flowers that look exactly like the one he tattooed. I then named the garden after Matt Wright and treat it with great care, as it is almost as valuable as the tattoo he gave me. Keep up the great work Matt Wright!!!!

Been getting tattooed for a few years by Corey always does an amazing job. All the guys here though do great work. Only place I'll go!

I was lucky enough to call and get a same day appt with Travis. He did an amazing job! He took the idea I had in my head and made it perfect on my arm. I will never have anyone but him do a tattoo for me. He also refreshed a tattoo I had on my other arm that had faded. The shop was clean and the staff very nice!I would definitely recommend this shop to everyone looking for a high quality tattoo.

I've had 6 piercings and a tattoo done here and loved the people and how professional they are!! Looking forward to getting some tattoos soon!!

I am a college student and I went to Indiana from my punxys campus to come here for a tattoo. I came in expecting to make an appointment, but they fit me in right away and did a really good job. I have anxiety and they helped me through my first tattoo. Over all good , friendly staff. And I had Tylenol but very talented staff. And very affordable prices for tattoos and percings. I was over all impressed.

If you want an overpriced and mediocre tattoo...you’ll go here.

I got my tragus pierced. I have small ears and it was a very smooth process.

I've gotten multiple tattoos there, by Travis and Corey, both were good experiences. I'll be going back to Untouchable Inc. for more tattoos in the future as well.

Nice work..... I plan on getting more soon

I love their work, definitely check them out for any future body art.

Tyler did a fantastic job for me!

One of the cleanest, most professional joints you'll find. Positive vibes and great art! These guys are legit and care greatly about the customer.

Amazing work by some of the best artists in town. Clean shop, great people and great customer service. You're making a mistake if you go anywhere else!

I do understand that this shop is more focused on tattoos, but this experience is about the piercing aspect. Their tattoo work is incredible and definitely some of the best around. *This review is specifically about the piercing aspect of the shop* I called in and asked if they could change out my nostril & my septum hoops to a stud and a retainer. They said yes. I had my original jewelry that I got from an APP shop, the stud being a flat back internally threaded stud. The hoops I had in were both 16G. I would like to point out that both of these piercings were over 5 months old, were pretty much fully healed, and had been changed before. Whenever I got there, the piercer took them out and tried to put the stud in. She tried to put a 14G taper into my nostril so she could see where to put the stud in the back, but when she did that, obviously my nose got very irritated and started bleeding and got VERY sore and swollen. She then called another person over to try to get it, but it was so swollen at that point that after 30 minutes, my original hoop that I came in with would not go in. My piercing is now closed because it’s still incredibly sore, red, and it’s been a few days without anything in. They were very nice about everything & I hate to leave a bad review, but my piercing is ruined because they didn’t know how to put a flat back stud in. They claimed they didn’t do them there “because you can’t see” but I have gotten it changed twice before this and I never had a problem. I have to wait to get it redone. I know if I would have went somewhere else, this would not have happened. I appreciate them being kind about it, and this shop is really great at tattoos... but when it comes to piercings, maybe seek elsewhere.

Been tatted by both Travis and Corey. Best shop in the area, hands down. They do great work and are clean and professional.

Travis took his time and made sure that my cover-up was solid. Easy scheduling, but don't expect same day. Very clean. I recommend Travis, but I believe any of the artists will do a great job.

Travis and Corey are the only two who have worked on me and each time has been fantastic! Fun people who create amazing art and work. Always professional, exceptionally clean, meticulous with their workstation & art, and very helpful with aftercare information. I'll be stopping by again soon!

This place is awesome, good, clean environment and positive upbeat people. Travis is awesome to work with and will definitely be going back

Great work by a great group of guys, will continue to always come back.

Great place! Got 4 piercings on Tuesday (double helix on the right side and a forward helix and a single helix on the left) The women piercing me was super friendly and knowledgeable. I felt lightheaded halfway through and she kept checking on me and asked me multiple times if I wanted to continue or come back in a few days. Super helpful and nice! Definitely recommend anyone to come here. 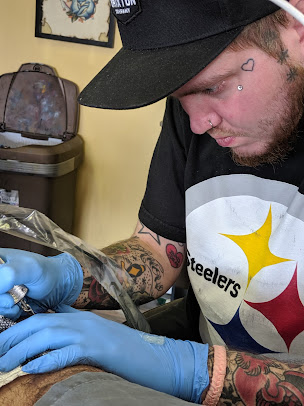 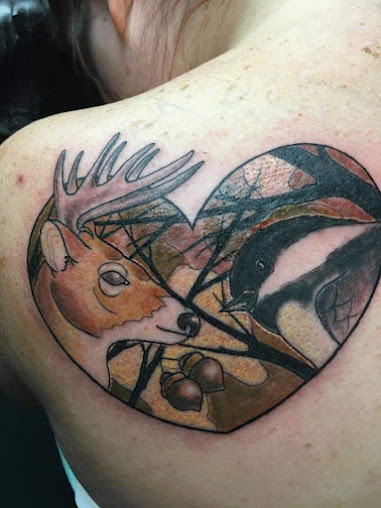 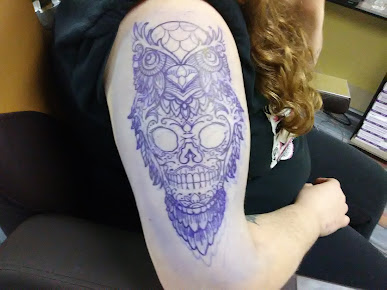 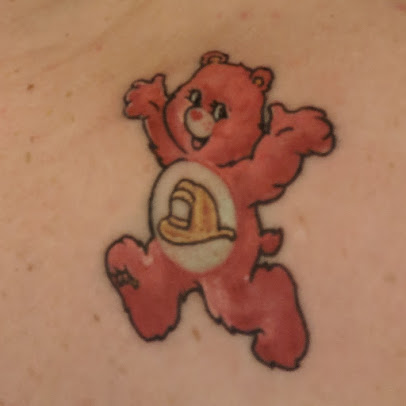 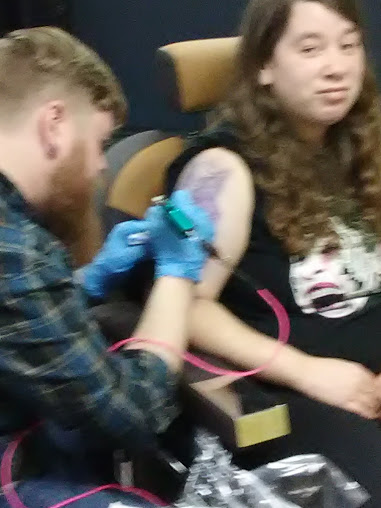 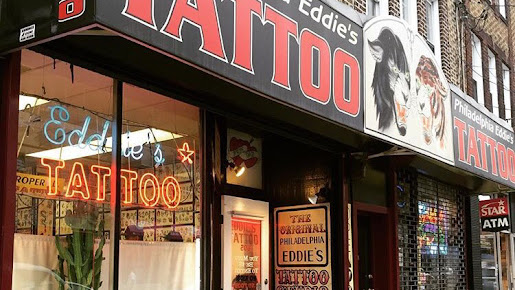 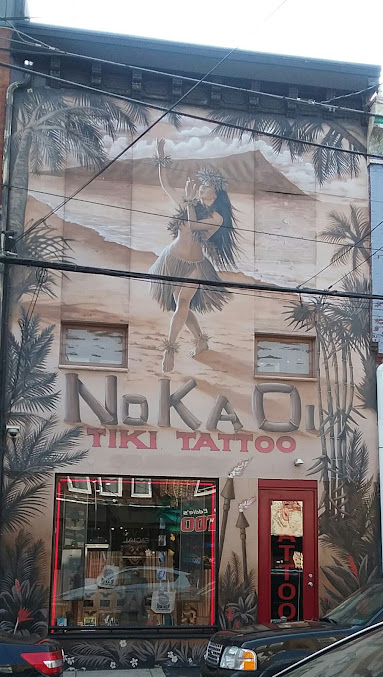 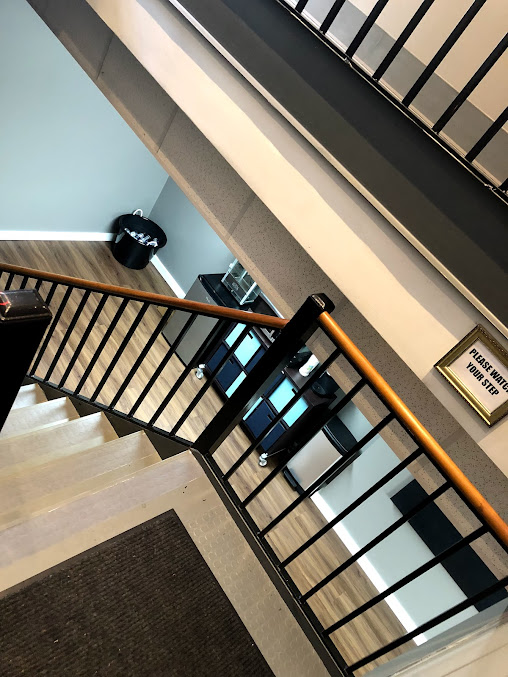