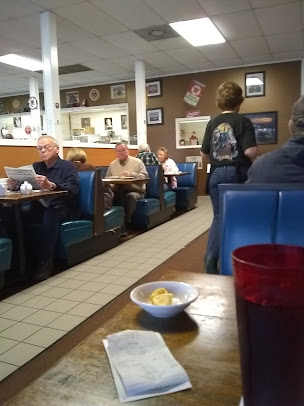 You will see all the opinions of people who are using the products of Ann\'s Family Diner (Restaurant) in the state of Virginia.

Right now the business gets a rating of 4.1 over 5 and that score has been based on 184 reviews.

As you can read, it has an average rating is very positive, and it is based on a high number of reviews, so we may say that the rating is very accurate. If there are many people who bothered to evaluate when they've done well, is that it works.

You know that we don't usually stop to write opinions when these are good and we usually do it only if we've had a problem or incidence...

This Restaurant belongs to the category of American restaurant.

Where is Ann's Family Diner?

Ann's Diner is great. You are greeted with a "Welcome to Ann's". The wait service and the food, well all I can say is TERRIFIC! My favorite is the Chicken Fried Steak. The closest thing to "Texas Made" I have found here in Virginia. They have a super salad/soup (home made) bar. Give Ann's a try and you will definitely be planning a return trip. Ann's is closed on Mondays so plan your trip accordingly. Enjoy your meal!

Food was not as good as in the past. Great atmosphere but prices were high for meal that was discarded

This place is awesome

Awful service food and management i will never be coming back.

Service was extremely slow for breakfast. I have never experienced that from them in the past but this was my first breakfast there.

On Saturday my family and I went there for breakfast after we ordered we waited an hour and a half for our food. The waitress was polite but gave no apology for the wait. This is the second time I've had a bad experience at this place! I won't be back!!!

Meal tasted bad. Like something you'd get for fifty cents in the frozen department at the grocery store. I ordered sausage gravy and biscuits and the gravy was disgustingly greasy and had no flavor. The biscuits weren't even really biscuits and were really underdone. You'd get better at the Hardee's down the road for a better price

Great waitress But food only fair. Chicken fried stack had too much breading and meat was not tender enough. Fried chicken over cooked. But beets were fantastic

Good food, decent service. That's all there really is to say about it. You seat yourself and depending on the size of your party you may have to wait around. Small menu very love prices.

As a traveler we picked it off hand ,but what a happy surprise! The primerib was huge and delicious. The rest of my group started their orders were the same.

Always a must stop when visiting my family. Great food!

Best service and food I have had in a long time. Large portions.

Visited at noon, Saturday, September 8th, 2018. There 4 tables being served when we arrived. (The rest of the tables were empty.) Two young ladies behind the counter, seated and doing what I perceived to be rolling utensils in napkins. One told us to have a seat anywhere we'd like, so we did. 5 minutes later no one had come to our table to greet us, bring menus, nor take our drink order; so, we left. On our way out, I told the same two young ladies, still seated and rolling utensils, to have a good weekend. We had a good lunch at THE COURTHOUSE RESTAURANT!

Never has what is on menu that you want- '" we are out of that'' friendly staff.

Great food and service,,even though they were very busy,,Father's Day weekend,,definitely a great place to eat.

Ann's is a consistently a good place to eat.

Great food and service! Did not disappoint at all!

We had bbq French fries Cole slaw and pickled beets, service was friendly, she knew the menu and offered different foods, we were very pleased with every thing.

Always enjoy Ann's Family Diner. The food and service is always on spot. Please try the Cherry Cobbler with Vanilla Ice Cream. Out of this world ! Delicious !

Food was great in the past, don't know about the present. Getting service is aweful latetly. Waited 10 minutes and they only had three tables being occupied, They stated we didn't see you. Then next time waited five minutes sitting across from the cash register and no still no service. Make sure you get spotted before you sit down.

Great service. You can't beat the prices. I was so delighted to get this raspberry lambic in our rural county. What a nice surprise. Everything was good.

Cheap and homemade style foods, love the atmosphere and the workers. They all work hard. Go there and support our local businesses!

Love this diner. My husband and I go often. It isn't fancy but the food is good homestyle cooking. Owner and wait staff are down home people, friendly and personable. Prices are reasonable.

It's a good place to eat.

- I enjoyed, all my visits .food was country style, just like I like and an use to , service could improve,

Great Taste, An Amazing Staff, Great Building, right there in the middle of Gloucester!

Food can sometimes be lacking but really good

Great service at certain times of the day. Some restaurant servers are more pleasant than others, and some are more attendant than others. Overall, a friendly family place to go for a good, like home cooked, meal.

First time, but I'll be back. Great food, reasonable prices. Staff was extremely friendly and helpful.

The service was fine. Server was very courteous and friendly. Store seemed clean and well maintained. The food was nothing special. Rib eye sandwich was paper thin (equally inexpensive to be fair) The fried chicken was a good portion for the price, seemed handmade but the breading flavor was too sweet and doughy. Cole slaw had too much vinegar. Just not my type of food. I think the draw to Anns are the weekly specials which we did not have

I haven't been there

Stopped by for a late lunch with a young man who had never eaten here before. When I asked what he wanted for lunch he suggested Hardee’s cause he wanted a good burger. So I suggested Ann’s. I happy to report that this young man said he’d never go back to fast food burgers again. He couldn’t get over the size of his sandwich and the quality of the food for the price. He was shocked that his combo came with a heaping pile of fresh cut fries and a bowl of homemade coleslaw. My soup and salad from the all you can eat bar was perfect as well. Thank goodness for the privately own restaurants in G-Town!

Very nice waitress and other staff. Food was very good and plentiful

Food and staff is fabulous.

Love the food and service. Eat there often.

Kinda pricey and not as good as it was years ago. The interior is kind of cheesy.

Food is pretty good here. Their waffles are amazing. There was one time we tried to come for breakfast and not a single open table was cleared of the previous diners plates, so unfortunately we walked out and had breakfast at chick fil a instead. Hope to not have that issue again.

Serving breakfast for 40plus year's

My family had breakfast there Saturday.We were given menus but waited 30 minutes to have our order taken We then waited an hour and a half on our food. The server never came to say I'm sorry we are backed up orxsorry about your wait or someone called in sick so we sat there wondering while all the while people around us who came in after us were getting their food. Very unprofessional very rude. A little explanation goes along way! But in my opinion the worst experience I've ever had at this resturaunt!

Family oriented, clean, home cooked food, and friendly staff. The restaurant was filled almost to capacity when I visited but the food was still served fairly quickly and with a smile. The waitress was very attentive to our needs.

My family and I have been here several time since the place opened up. Most of the time the service has been great. One instance we came in on a Friday evening to a full restaurant. Had to wait a few minutes and then we’re promptly seated and greeted. Even on a busy night the service and food were excellent. I’m sitting in the restaurant as I write this and I must say, they have hired some young, inexperienced girls that have little clue as to what customer service is. The food has never been bad at all. That is the one thing that stays consistent. Never had a bad experience with any of the food, weather it be breakfast, lunch or dinner. The service from the wait staff leaves a lot to be desired. Just watched and heard one of the long time servers quit and walk out due to management. Whoever is running this place management wise needs to get there s#!t together before the servers run off all the faithful locals.

Their food is cooked perfectly and tastes awesomely delicious.

Food is always great and our server, SHELBY, is very attentive and such a LADY!!!!

Been two different times and never got any type of service, never got to order because they helped everyone that came in after us and forgot about us both times. Ended up walking out again and will not be back to waste my time again at a restaurant with ZERO customer service. Horrible!!!!

The food was really good. You get quite a bit as well. Prices are average for the establishment type.

Nothing that spectacular, but also not bad.

I do not know if the food is good or not, as we did not get the chance to try it. We waited for a bit for a server and menus, but had already decided we wanted the special. We were told that all the remaining steaks would be medium or more cooked....fine...no problem. They took our drink order, then when our waitress returned with them, we were informed that they just ran out of prime rib (the special was for this or several seafood options, but several of us cannot eat seafood). We asked if they could offer a substitution, but we were told that they couldn't do that because they had reservations on future dates and they didnt want to run out of steaks...so we, the customers sitting at the table, with drinks and waiting to order, could not have a steak, but someone coming in a day or two can have it....so, we left. Evidently, if you do want steak, you need to call days in advance to reserve it...that's what we were advised to do in the future....but, I don't think we'll be going back. I've worked in many restaurants, and this just isn't the way to treat customers. I mean, I would understand if we were told when we came in. That would be understandable, but to come in and be told our options, then have that change while waiting for someone to take our order, and then them not being willing to work with us at all....it's just not right.

Steak was cooked perfect and food was very good. Great place for young kids my 2.5 year old had a great time. 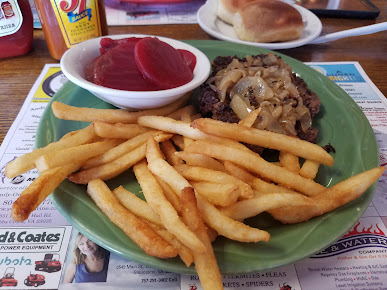 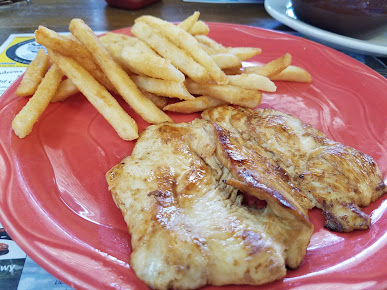 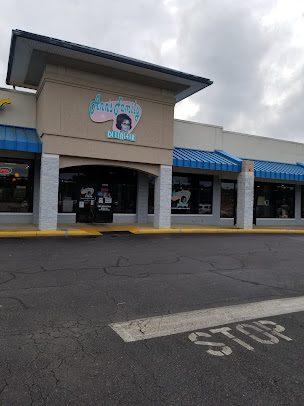 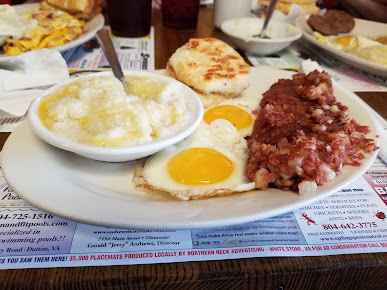 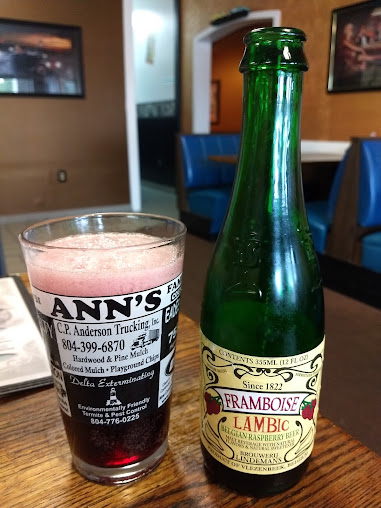 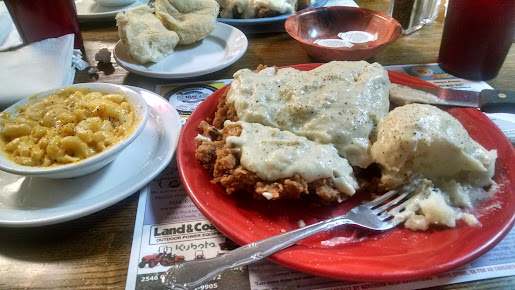 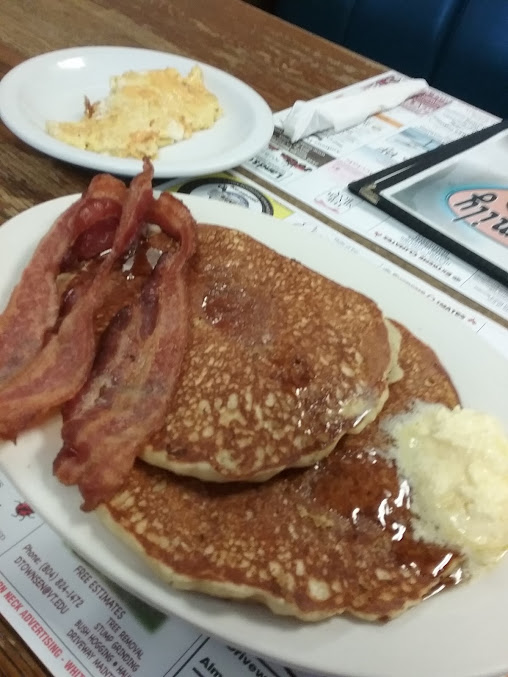 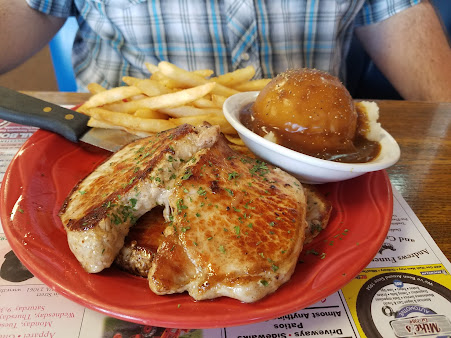 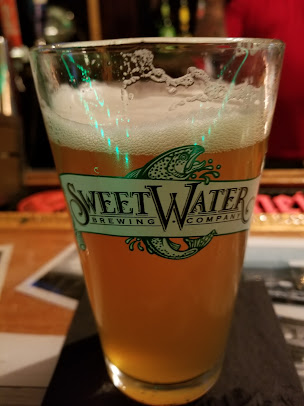 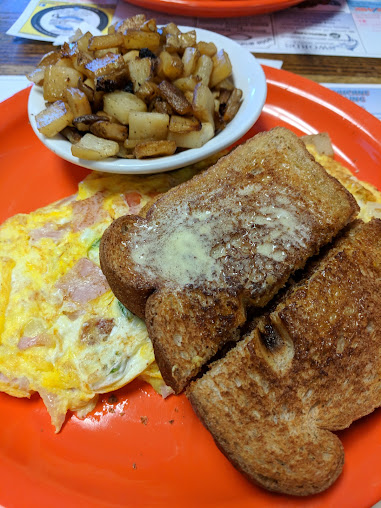 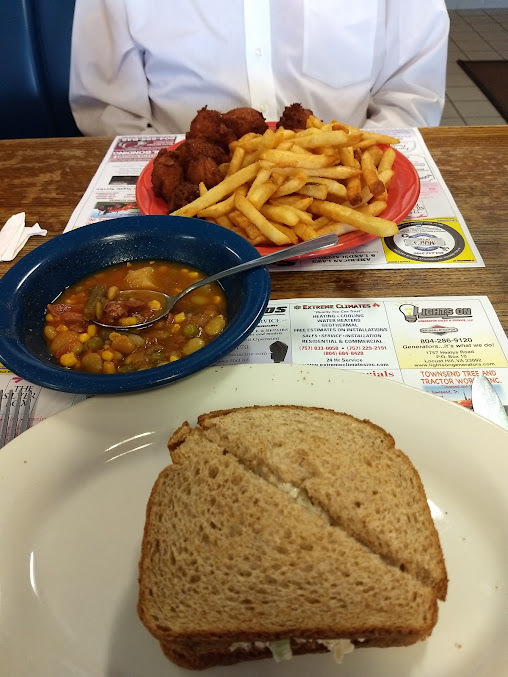 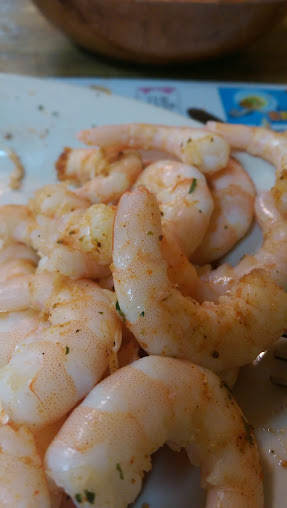 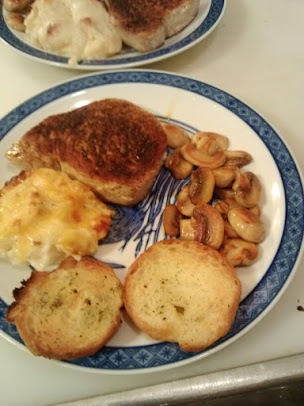 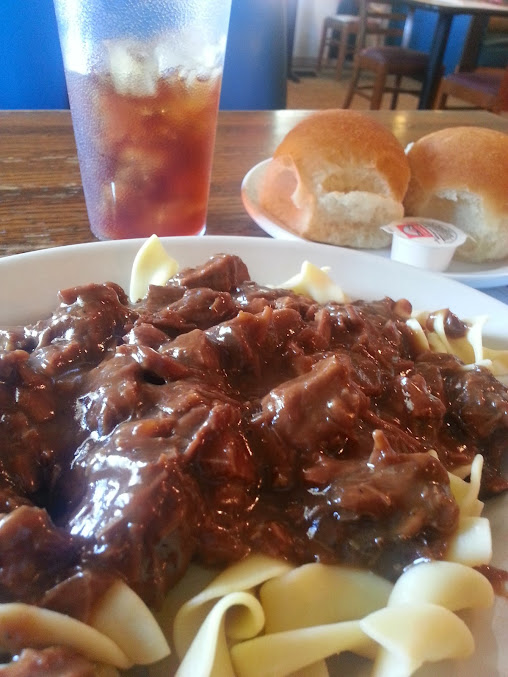 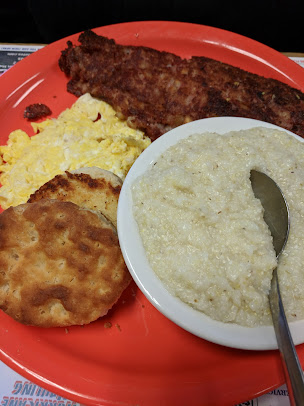 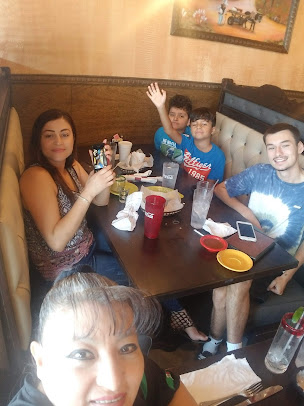 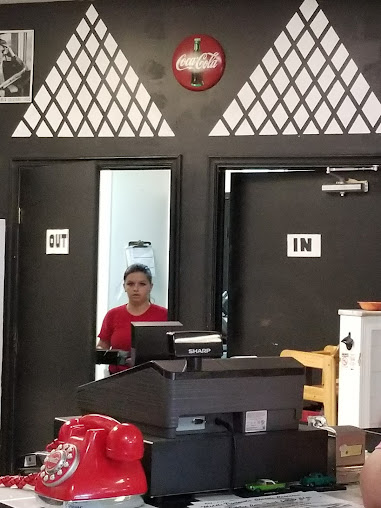 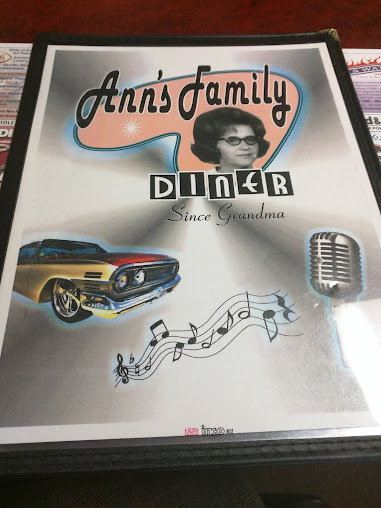 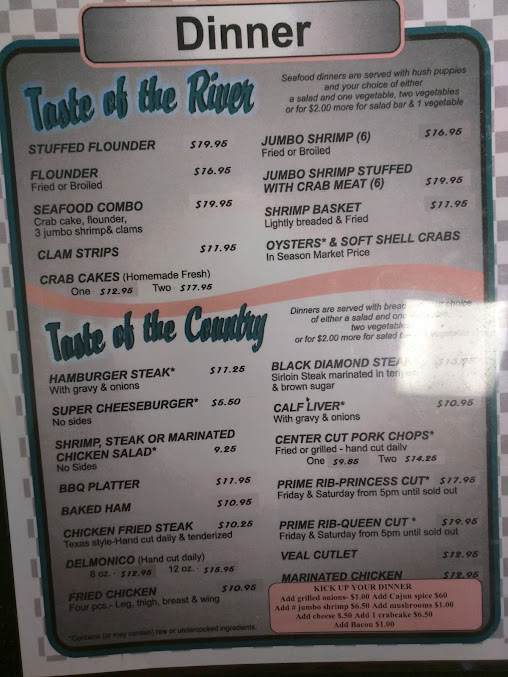 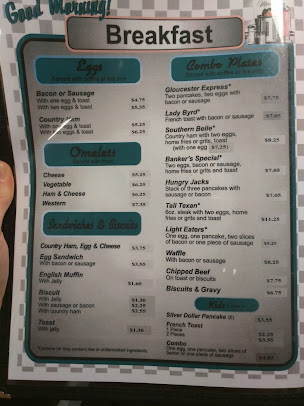 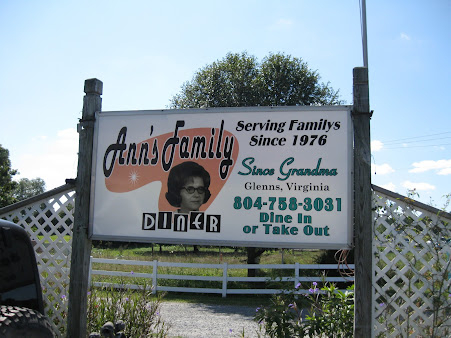 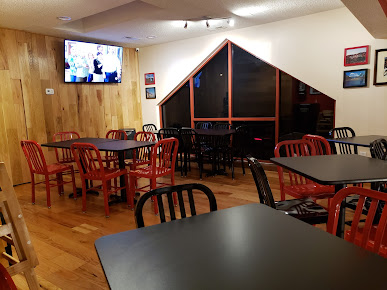 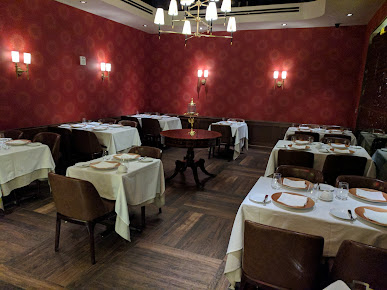 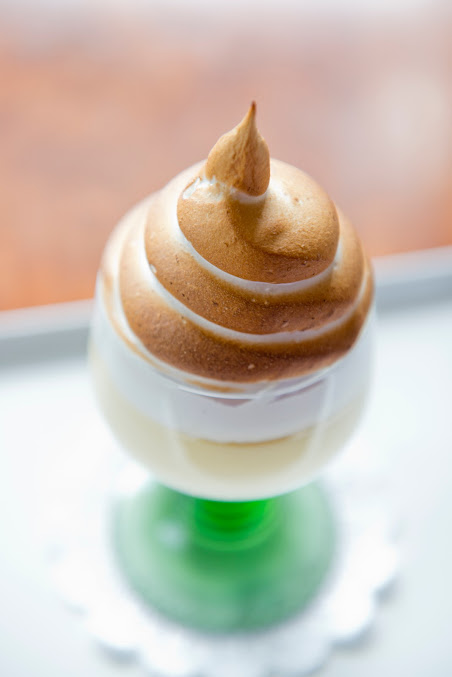 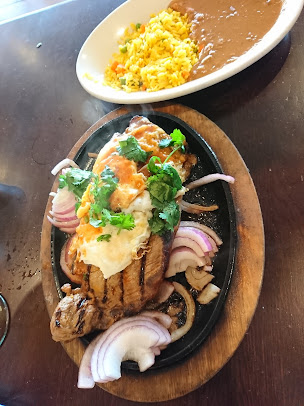