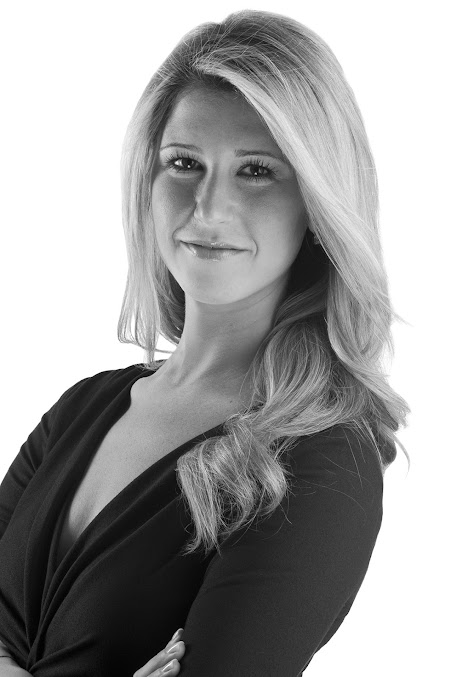 Here you have all the opinions of real people like you who are purchasing the services and products of R New York (Real Estate Agency) in the state of New York.

You must have seen that the average of ratings that it reaches is good, and it is founded on a high number of opinions, so we may be quite sure that the valuation is quite accurate. If there are many people who bothered to evaluate when they've done well with the business, it works.

You know that we don't usually stop to give reviews when these are good and we usually do it only if we've had a problem or issue...

This Real Estate Agency belongs to the category of Real estate agency.

Where is R New York?

nicest brokers around with the best knowledge of the markets. 10/10 would use again

Julie Zhang and Lelia Ricklin are the reason NYC real estate agents/brokers get a bad reputation! Don't waste your time with these uneducated and untrustworthy individuals that don't come prepared to their listings-- calling them either an agent/broker is misleading and an insult to the actual professionals in this field. Avoid them at all costs and reach out to R New York to request to work with their multiple reliable individuals in the organization. My experience with R New York has been reuined even though they came highly recommended, owning multiple properties these "individuals" were hands down the most misleading in my 40+ years renting in the NYC area-- I guess there are are always a few bad eggs in the basket. AVOID JULIE AND LELIA AT ALL COSTS!

Definitely highly recommend working with this firm! All of the agents I personally came in contact with are all very knowledgeable and friendly, and will always put the customer first. If you are not doing business with Rutenberg you are making a mistake. keep up the good work agents!!

Best firm the New York! Everyone from the corporate office to agents are extremely helpful and knowledgeable. Most importantly, everyone I have dealt with is trustworthy. In this business, that's extremely hard to find. I plan on dealing with Charles Rutenberg NYC exclusively going forward.

Great service. Very friendly and skilled agents. Over all very pleased with my experience at Ruttenberg NYC.

I came across Rutenberg simply by seen a large amount of their signs on various properties and could not be happier when I called for some showings. Very professional and accommodating!

Worked with Gaby to find my first apartment in the city she was unbelievably professional, always kept us in the loop, and we had a lease signed within 24 hours. What more could you possibly ask for? What a experience :)

The commercial agents will do extensive searches to find the best locations for your enterprise. Then they help to negotiate the lowest price per. You really can't do any better than them.

Loved working with them! Very reliable and always happy to help. Professional and enthusiastic.

Based on previous reviewers being content with their service, if I ever need a real estate agency in the future, I would highly consider the Rutenberg company.

Amazing group to work with. Helped me find a great lease in the price range I was looking for

They are such a great group of people. Everyone is knowledgeable about the field and extremely professional.

This is a firm that regularly practices bait & switch. I was already on the way to a showing when the agent (Timothy Edwards) cancelled on me because I wasn’t willing to view an apartment that was $125 more a month than the original listing I wanted to view. Super unprofessional and Timothy failed to apologize for cancelling on us last minute when we were already on the way. Avoid this agency at ALL costs for their lack of professionalism and communication skills.

Rutenberg is the best company to work with!! Their agents and staff always strive to have the best service. They are responsive and helpful in every way. Will always use Rutenberg for all things real estate!

Great company very professional and very intelligent would recommend to anyone

Based on my experience with Lelia Ricklin and Julie Zhang they are an uncoordinated dynamic duo-- don't waste your time with their listings instead reach out to R New York directly to avoid working with them and get the proper information upfront.

Really the best around!

Great experience working with them, very professional. Wish I could rate higher!!

Broker Andarz aka Andy Abedini is the dudebro of NYC real estate. He showed up to a property I wanted to see drunk and aggressive. I could smell alcohol on him. He opened doors by slamming them against the wall. Every time I tried to ask a question about the apartment, he cut me off and spoke over me. He demanded I send him his email address, which I half-heartedly did because I liked the property. He responded in his typical unprofessional manner, with heaps of disrespect and condescension, and saying the property was "totally rented" (is it possible for an apt to be less than "totally" rented?). Less than 12 hours later...on a Sunday morning. I called up the management myself that morning and the woman speaking on behalf of Carol, the manager, said the property had not been rented. Numerous phone calls and emails were sent to Charles Rutenberg to complain of Andybro's behavior, and when I finally got someone on the phone, I was not confident the issue of his behavior would be resolved. Maybe there are other brokers at CR that account for their good reviews. I wouldn't automatically presume the reviews here are fake. However, I don't believe for a second this guy could possibly inspire any 5 star reviews you may find on the internet. Caveat emptor and don't enable this guy by giving these guys your business.

What a pleasure to work with this agency - it is evident that this is a group of people who are passionate about what they do and ensuring client satisfaction. Blown away by their responsiveness!

Great company with the best brokers around - seamless experience!

Helped close a deal very fast. Pleasure to work with, would recommend.

Agent was extremely rude and interrupted constantly. Would not work with again!

Amazing company to work with and work for! Agents are knowledgeable, professional, and honest and always striving to make the best deals for their clients. Rutenberg goes above and beyond in making their agents happy between ongoing support and training and their 100% commission model.

Great company with highly skilled brokers that are very helpful and responsive!

Could not recommend more highly!!! Very professional, always incredibly responsive, organized, and completely had my best interest in mind. I felt that they were a partner in my search and I had a far better experience than other firms I've worked with. The best!

Great bunch of savvy brokers, whether in condo's , commercial or rentals. I've done business with them for years and you will not be disappointed. Class act all around from top management down. Only complaint, Why the name change ?

I had a great experience with them, couldnt have been happier, i had some knowledge in the field, but in spots where i had weak points they had me covered all the way. Would definetly recommend, i think most of the times when people have a bad time with a realtor is when they think they know more then them all the time and it just comes down to the question, if you know it all why did you hire them in the first place. With Rutenberg nyc, they didnt overstep me, just filled me in and guided me in spots i was lacking knowledge in and had missed out. Cant thank them enough. Definetly Recommended

They were extremely helpful, timely, and courteous. I would definitely use this company again.

Went to an open house with Lelia Ricklin who was not informed on details of the unit or application/approval process. Icing on the cake was her colleague Julie Zhang saying we did not qualify after being upfront from the very beginning with our information and than having the audacity to tell me I did not qualify based on my credit score (WHICH SHE DID NOT EVEN RUN!). Avoid these untrustworthy agents and reach out to R New York directly to view a listing as everyone else in the group was extremely helpful.

Brokers have tremendous knowledge of the real estate market and are committed to servicing the needs of their clients.

Brokers are exceptional in every way. Friendly, trustworthy, and very knowledgeable. Listened to my needs and helped me find the perfect place!

This is a company filled with people who are truly great to work with. Cannot recommend them highly enough.

Found an awesome apartment. Use Marvin, he is the best

I had amazing experience using Rutenberg! I felt taken care of and was shown the best available in my price range. The next time I move or buy I will definitely use them again!

Rutenberg has been a huge help with my real estate needs. They are extremely knowledgeable about the current market and have great agents ready to assist your needs.

When you're with them, you feel like they have your back. Beyond professionalism, they understand how to work with people and listen to our concerns - a rarity in realty today.

Closed a recent sale with Julie Zhang who was extremely helpful in helping find this great deal. Very experienced in navigating through New York real estate. She deserves multiple 5 stars !!

They made my whole apartment hunting process so simple. Ended up with a perfect place at a great price. My broker was always reachable too. I'll definitely use them again

Very experienced and very professional. Will handle all your real estate needs.

Very experienced team that pays attention to every detail!

The relators are amazing and paybckose attention to what you want.

Amazing Realtors who have both the knowledge and experience to make residential and commercial transactions seem easy. Rutenberg truly are the "Smart Brokers"

The best in NYC! Amazing to work with.

Working with this company was a wonderfully pleasant experience. Everyone was very helpful and I will be certain to do business with Rutenberg again.

I've done 2 deals here and couldn't be happier. I'd highly recommend them as they're very experienced, knowledgable and professional.

I just closed a rental deal with Leo Mavraj. I definitely think that he’s one of the most professional brokers i meet. He dealt with the situation very professionally and I’m very happy with the results.

Great company with very knowledgeable professionals! Always feel welcome here and their new office is amazing. Their residential agents are all over the city and have someone that specializes in every area. The commercial department has really grown as well and is very up and coming.

I just closed a rental deal for a great co-op apartment with Eric Staub. It was such a pleasure working with Eric. He went above and beyond from the first e-mail regarding the showing process. In my 10+ years renting in New York, I have not met a more trustworthy and hands-on agent! Eric answered all of my questions/concerns promptly and with keen knowledge of the facts. He was a superb "in-between" during my negotiation process with the owner. I am highly impressed by Eric's professionalism, promptness and honestly. I highly recommend working with Eric Staub for any of your real estate needs. 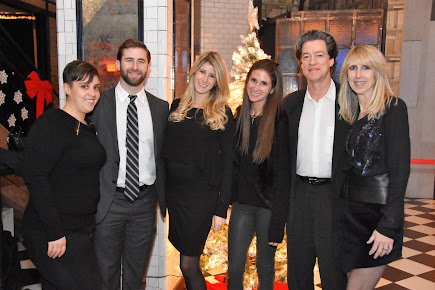 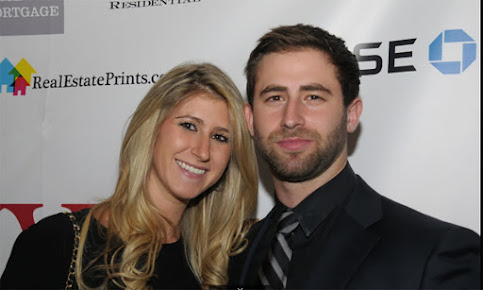 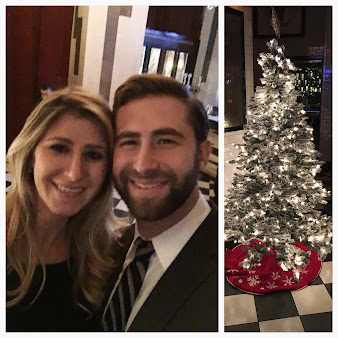 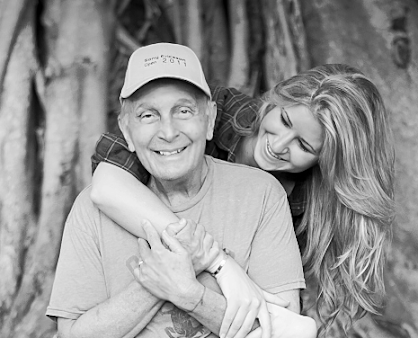 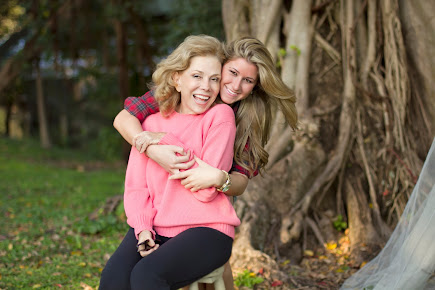 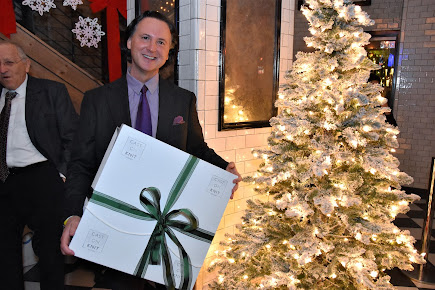 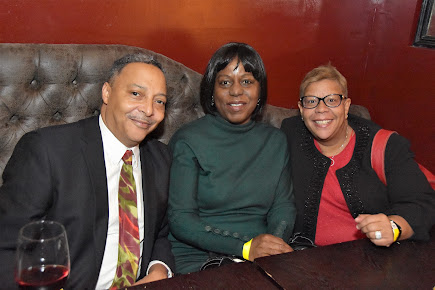 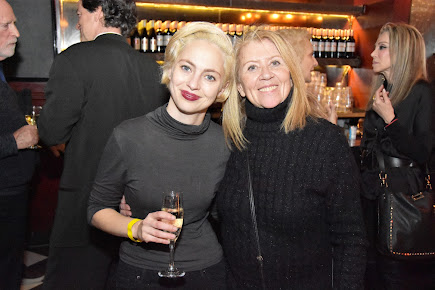 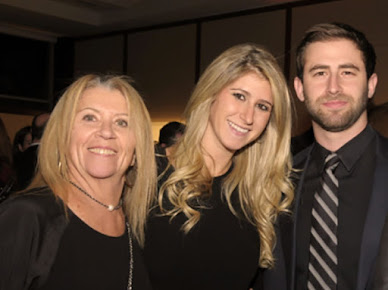 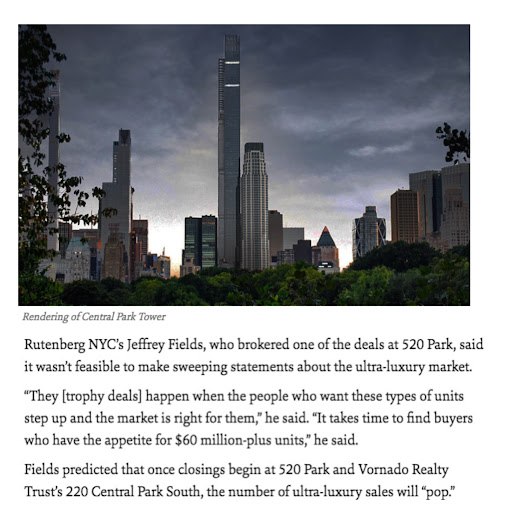 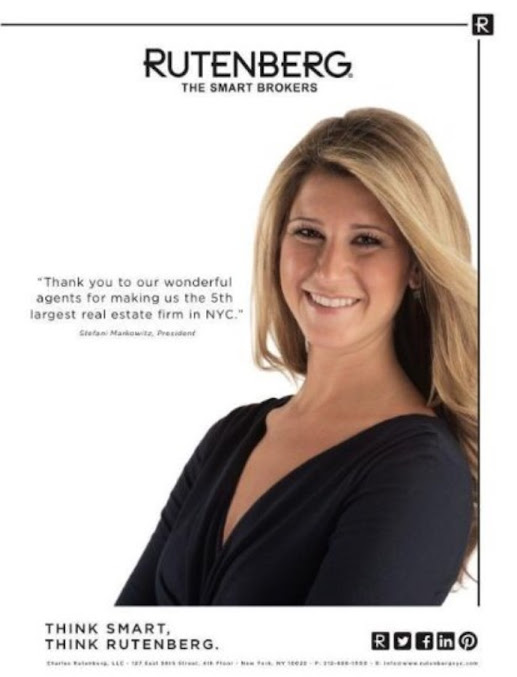 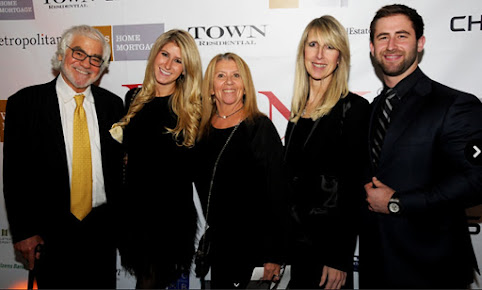 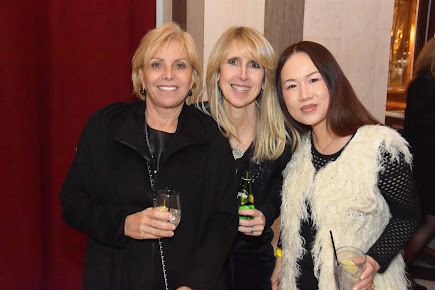 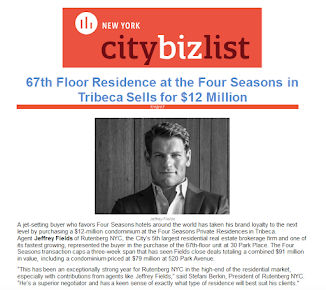 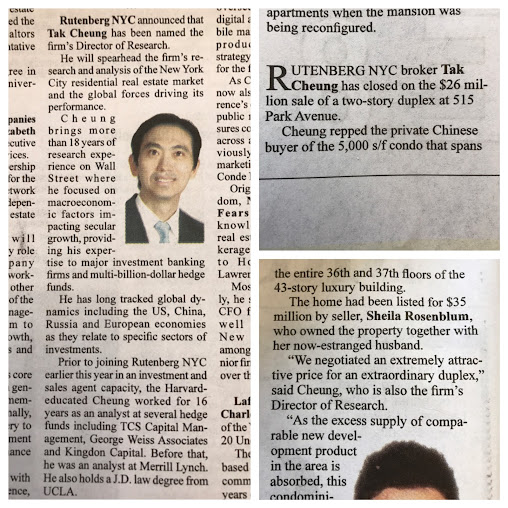 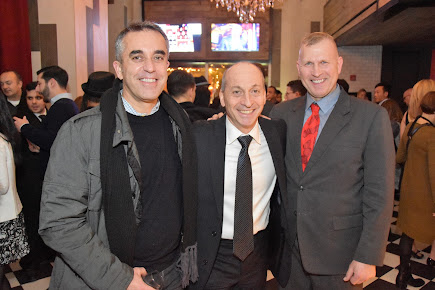 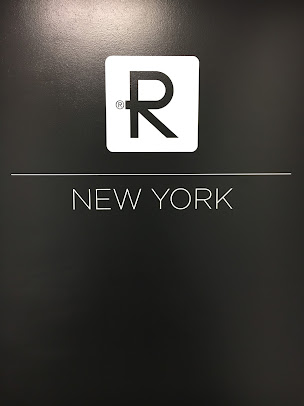 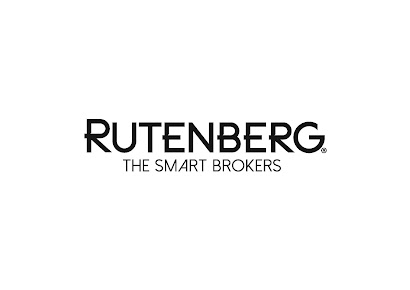 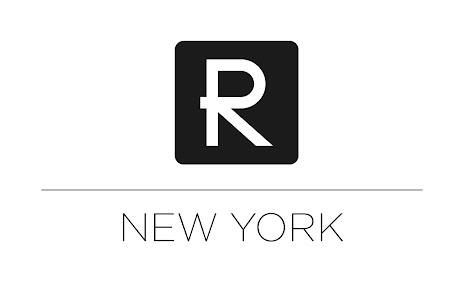 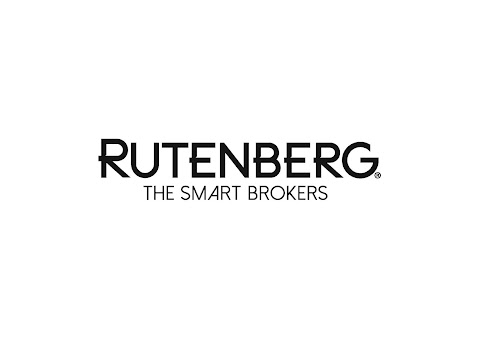 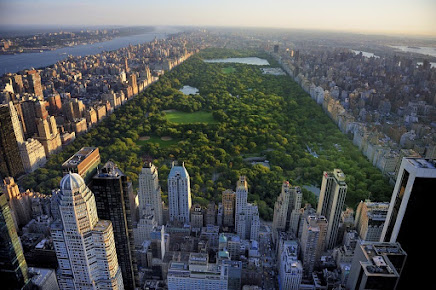