We offer you the information of real people like you who consume the products of Karen\'s School of Dance (Dance School) in the area close to Michigan.

At present this business has a rating of 4.4 stars out of 5 and the rating was based on 14 reviews.

As you can see it reaches an reviews average is very good, and it's based on quite a few reviews, so the rating is rationally credible, although it doesn't have a sufficient amount of valuations to confer it total reliability.

You know that we don't usually stop to write scores when they are good and we usually do it only if we have had a problem or incidence...

Where is Karen's School of Dance?

REVIEWS OF Karen's School of Dance IN Michigan

Amazing studio! Every instructor is very qualified and the owner Karen, is the perfect mix of toughness and compassion. My daughter has learned more in 6 months than in all the other studios combined. Truly happy.

Switched to Karen's two years ago and my daughter has done nothing but excell in all areas of her dance since doing so. She is only 9 however, under KSD guidance she has received numerous titles and championships both Regionally and Nationally. More importantly, she has built some of the most amazing relationships with both the staff and her teammates. Highly recommend.

I danced at KSD for 11 years. It was the worst mistake I ever made. For someone who just wants to have fun (and drama) then this is the place for you. If you want to be a professional, please, please take my advice and go somewhere else, you'll thank me later. The training at this studio is obsolete. It is absolutely unacceptable. The teachers are not even qualified to choreograph (and if they do, its a complete mess) so they actually hire outside choreographers. This is typical at other studios for a couple of numbers if it is a well-known choreographer but to hire choreographers for almost (if not ALL) of their numbers? That is ridiculous. It's a MASSIVE added expense and you should not have to pay for that. Dance instructors (qualified ones) are supposed to be able to train and choreograph. That is what a dance instructor does. That in and of itself should tell you enough about this studio, but I will go on. Karen plays favorites. If you're on her good side, expect front row. Bad side, you might as well just quit because she will make your life a living hell. I was on Karen's good side for years. My technique stopped improving around age 10. Want to know why? Ballet classes are the same everyday. Jazz classes go straight into cleaning the routine, where was the technique?! I don't think I got a correction from any teacher for YEARS. That's because I was already better than the teachers. I had outgrown the studio at age 10. So I decided to look elsewhere because I could tell I was not up to par with other kids my age that I had seen at competitions - oh and another thing, Karen will only attend competitions that she knows she will win at (KAR, etc.) She picks the bad ones on purpose - she wants to win, and she doesn't want the nationally ranked, superior studios there so everyone else can see how amazing they are. After I decided to move studios, Karen freaked out. Now I was on her bad side. She took away my spots in the dances and I was not allowed to do the last competition of the year or go to Nationals. It absolutely broke my heart. She is so unprofessional sometimes its hard to believe, she will also play favorites with the parents and thus drama ensues. After I moved studios, I improved more in 6 months than I had in the past 5 years at Karen's. It was a total culture shock. Everyone was there to dance and not to sit around and be lazy and talk crap like at Karen's. The teachers were professional. They didnt gossip, have personal relationships with parents, they were there to work you hard so that you could be the best you could be. My friends at Karen's saw my improvement and were jealous. Many wanted to change studios but Karen guilt-tripped them into staying. Many said they wanted to change to get better but "just couldn't do it." Karen may have changed some things since 2000, but I know Karen, and I know the former students she hires as teachers and that tells me that nothing has changed. Don't even get me started on her prices. My parents wasted THOUSANDS a year just for me to dance there. After we moved studios, the cost was a fraction of what we spent at Karen's for a FAR superior, nationally ranked studio.

As a complete novice to the dance world, I am grateful that I unexpectedly found this studio to call home for my tiny (now not so-tiny) dancer for the past 5 years. (soon to start our 6th season) It is a studio of excellence and a second home for my daughter in an environment that she loves and that I trust. The relationships established with peers, teachers, and other dance moms here are an invaluable byproduct of the time invested. It is like an extended family and I know that I can rely on any other dance mom or teacher to prepare, correct, aid, assist, console and encourage my daughter in any given situation. (as I would theirs). My favorite part is watching the incredible progress both my daughter and the other dancers that I've come to know and love progress year after year. Cheering them on, watching them accomplish new skills, and celebrating their victories is pure joy. It may have been just a chance coincidence that I chose this studio when my little girl was only 3 years old, but it has become a choice I intentionally make each year even though we have since moved out of the area. It's 100% worth the additional drive for the quality instruction and fun atmosphere for my girl.

My kids danced here for 14 years. I was pleased to see many of the graduates make Division 1 dance teams and receive college scholarships. I thought it spoke volumes about how this studio trained their dancers

Business Hours of Karen's School of Dance in Michigan 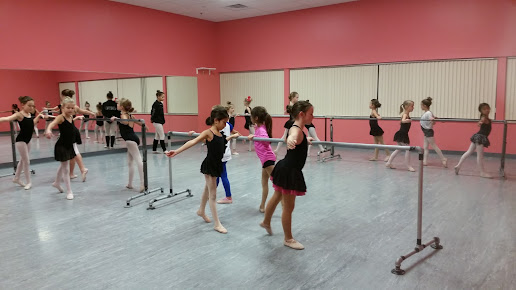