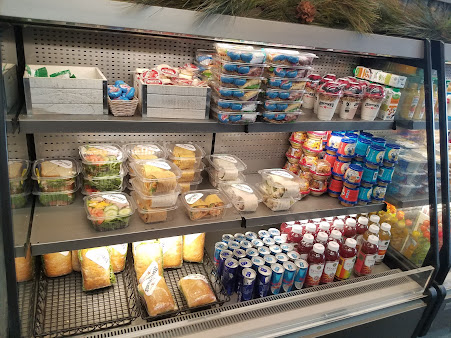 You will be able to see the feddbacks of people who bought the products of Jedediah\'s Inc (Catering) in Wyoming area.

At the moment the business receives a rating of 2.6 stars out of 5 and the rating is based on 52 reviews.

As you can read, the average of ratings that it reaches is discreet, and it's based on a very high number of scores, so we can be pretty sure that the rating is very accurate. If many people have bothered to leave their feddback when they are satisfied, is that it works.

You know that we do not usually bother to write feddbacks when these are correct and we usually do it only if we've had a problem or incidence...

REVIEWS OF Jedediah's Inc IN Wyoming

Good food, but super busy. Takes a while to order and get your food.

They promissed they will have Tea again 2 months ago ,that did not happend yet .Also online they tell you it’s open till 5:30pm and every day place is closed by 1:30pm .

Service is not so great. Their "to-go" package can be improved by giving a brown bag/cover to carry them to the plane. As they have kitchen, food was fresh, but the menu can be extensive with some more choices.

I should have read the reviews before eating here. As a frequent flier, I’m used to overpriced food. But not used to the horrible service and subpar quality.

Food is better than the service especially if you're flying and haven't packed a meal or expect one on the flight.

The gift shop charges 2-3x what the shop across the way charges and don't care.

Sad to say the food quality has significantly deteriorated. Couldnt get the order right twice and the pancakes where like cardboard, I literally had to use my knife to cut them.

Had the breakfast veggie burrito and it was surprisingly decent. I've had better, but I've also had plenty worse, and given this is literally the only place to get food after security I was pleasantly surprised.

I liked this place in the past. Now you must be a passenger to enjoy their food. Poor location for people just passing through.

I’m giving this 2 stars because I haven’t ever felt this inspired to leave a bad review in my life. As I write this, I am choking down my almost translucent 15 dollar Bloody Mary out of principle, not pleasure. The mix is a pinkish slurry full of off white mystery chunks/insoluble flavor crystals that resemble diseased teeth. I’m not sure if I received this particular mixture because I asked for a spicy bloody, or because I’m not wearing a Patagonia vest (which seems to be the assumed dress code). I’d comment on the food as well, but I’ll simply say that I couldn’t finish the limp cheeseburger I ordered and wouldn’t recommend it to anyone that’s eaten real beef. Eat before you get to JAC or suffer the consequences.

I was starving which you would think would make the food at Jed's taste better, but it didnt. My buffallo chicken tacos were absolutely terrible and uninspired. I picked that item since the fried chicken tenders shouldve been impossible to mess up, but Jed found a way. The chicken tasted like it was frozen and reheated in a microwave. It was rubbery and tasteless, and the room temperature cardboard tortilla did it no favors. Avoid at all costs.

Super busy, but everything was good!

Surprisingly surly service, especially considering I met so many nice people in Jackson. The young woman at the register obviously doesn't want to serve customers, and even just sitting at a table - a man with a large box thrust it down in the middle of the table with nary a word - to put plastic forks out. If you like being treated like livestock, then this is the place for you.

$47 for a chicken wrap and a beer. Pretty raw deal.

Very mediocre spot. Small portions is what inspired me to leave a 3-star review. Long line and only one register. I dont know if they were short staffed or simply didn't feel it was necessary to maybe help speed up the order process, so people arent sandwiched in the coffee/water/snack aisle waitinh in line to order. Overall clean place with friendly staff.

Decent place, especially for an airport joint. Stuff is a little overpriced, but that is to be expected. Good and friendly service. Salad (prepackaged, berries + chicken + greens) was surprisingly good. Philly cheese steak was so-so, while fries were also surprisingly good. Unfortunately their breakfast options end at 10:30 AM.

So disorganized! I hope somebody enjoyed my breakfast. It took so long to get a basic menu item that I left to board the airplane.

Great service. I was flying out and had some food and a great loaf beer. Its fast pace but needs to be for a smaller airport.

Food is good but pricey. About what you would expect at the airport. Service was good and friendly.

Good price... good food... clean what more could you ask for?

I know airports are overpriced but as the only place to get food at Jackson airport, this place is robbing pepole blind! $14 for a prepackaged sandwich?! Just under $4 for a self serve coffee in a paper cup. As a family of 4, this was just prohibitively expensive.

So expensive for mediocre food, poor selections and they do not keep coffee and coffee condiments stocked. Had to go from one station to another to get what was needed. Cashier very friendly, but ridiculous process.

Nice little restaurant in the airport. It was clean and well stocked. My family and I found the service to be very friendly! They had several employees making rounds in the seating area to clear and clean the tables. Prices are reasonable. We had breakfast with young children; the food and portions were very good! Nice to know this place exists if you need a bite before flying.

Great place to relax before your flight. Marc, the bartender is a great guy to chat with!

I paid $17 for brisket street tacos that had a single thin slice of brisket on each taco. That was after they were out of the first two items I tried to order.

They have premade breakfast food (burrito, muffins, quesadilla, etc), but it does not say what is in them and the people working there don't know either.

Dry burger. Probably from frozen beef based on the patty's perfect round shape. Inefficient unlabeled lines for ordering and payment. You're probably just as well to bring food to the airport. There is no competition for hot food and it shows.

I'd like to say it was good. It wasn't. My husband and I both ordered burgers. I ordered a burger with bacon and cheddar cheese on a gluten free bun, which I paid extra for, and he ordered the BBQ Bacon Burger with pepperjack and a regular bun. When they arrived, my burger was drowned in bbq sauce and his burger had no bacon or bbq on it. We asked for it to be fixed, and they brought the burgers back but had clearly just taken the meat and cheese part off of my plate and replaced it. There was still BBQ sauce all over my plate! The gluten free bun had clearly come straight out of the refrigerator and was cold, hard as a rock, and inedible. I didn't bother with the top half after tasting it, and the bottom disintegrated into a mushy pile of grease under my burger, which still did not escape the BBQ sauce they had left all over my plate. I've had bad airport food, but this is tragic. I wouldn't have bothered with the bun if I'd known it would go straight from the cooler to my plate. I'm in the food industry: guys step up your game. This is how you're representing Jackson to everyone who flies through? Shame.

Turns out you need a plane ticket to eat here, but the manager was very accommodating and brought our breakfast out to the lobby. Very good Sourjacks!

Food is okay but their customer service can be better. Staff are rude. Long wait time because everyone else behind me get their ofer but I was still waiting for mine. 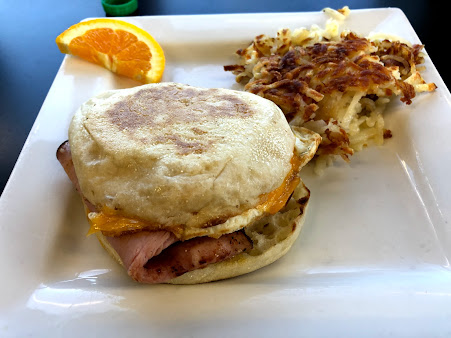 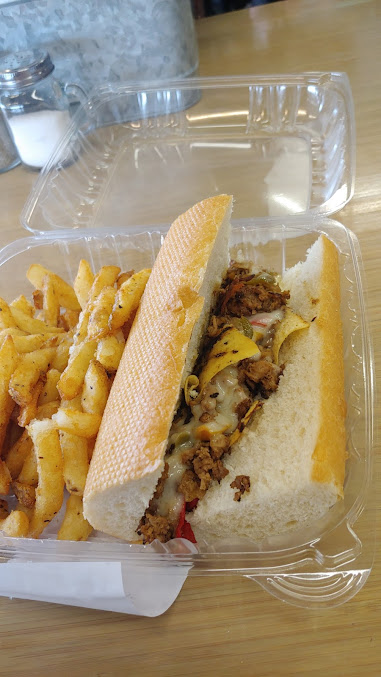 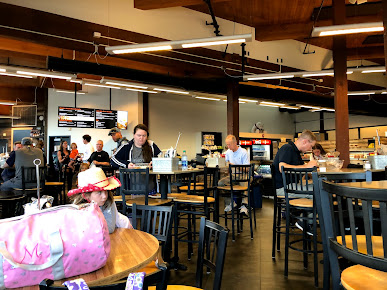 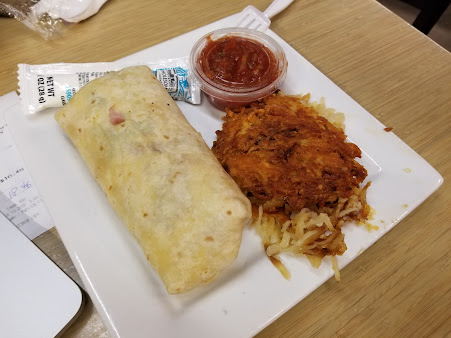 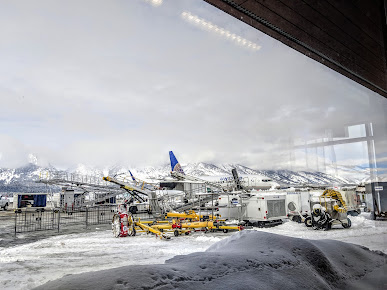 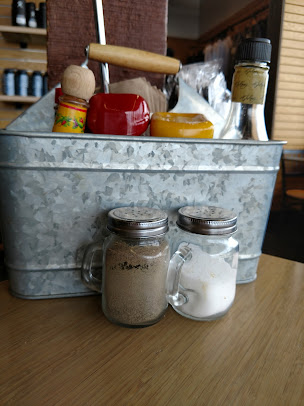 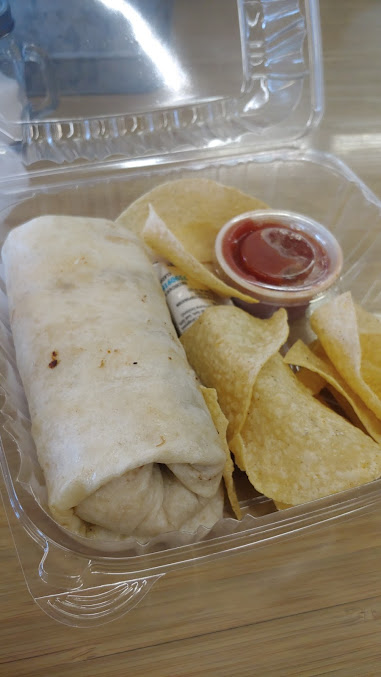 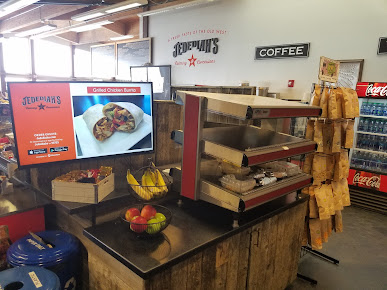 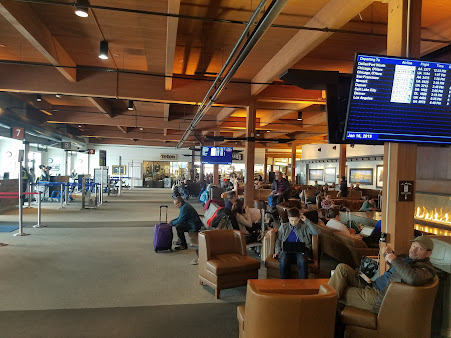 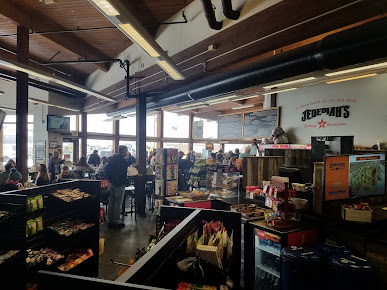 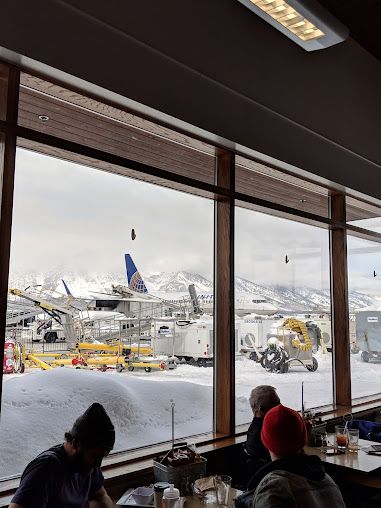 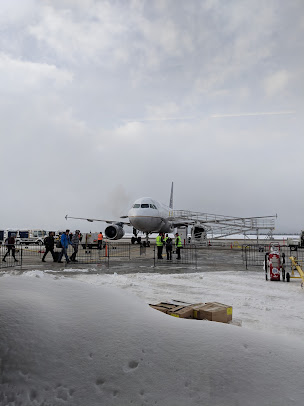 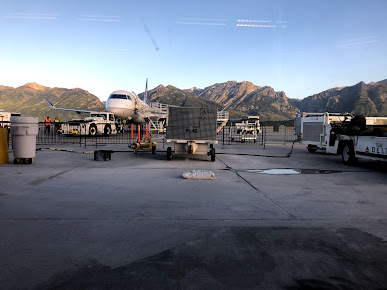 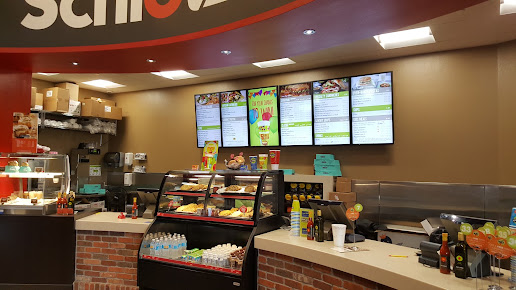 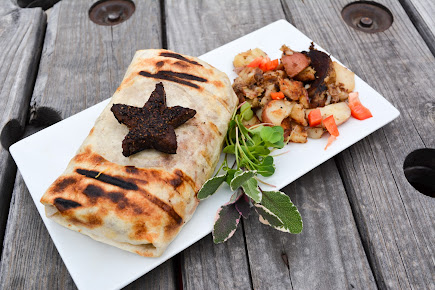 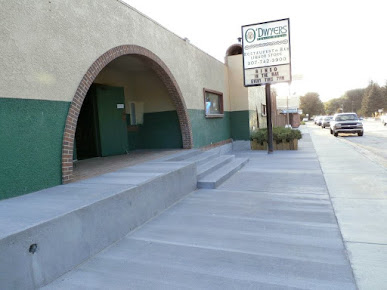 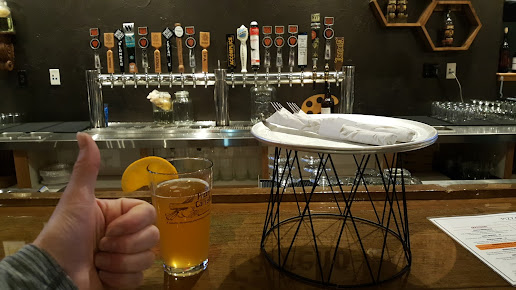