We offer you all the information of real people like you who consumed the products and services of Ironhorse Barbeque & Catering (Catering) around Arkansas area.

At present the firm receives a score of 4.2 stars over 5 and that rating was based on 193 reviews.

You may have noticed that it reaches an reviews average is really good, and it is founded on a very high number of feddbacks, so we can conclude that the rating is very reliable. If many people have bothered to value when they've done well, is that it works.

As you know, we do not usually bother to set opinions when these are positive and we usually do it only if we have had a problem or issue...

This Catering belongs to the category of Barbecue restaurant.

Where is Ironhorse Barbeque & Catering?

Not bad. Jumbo BBQ was large and tasty. Bbq was not the freshest ever but I walked in at 3p.m. Fries were crispy and well seasoned. Sweet tea was good. I'd go back again.

Really good food at good prices. A little busy at times though, I once waited 30 minutes for a cheeseburger but it was worth it.

The fish was good.

Melt in your mouth steak!! It was absolutely delicious. Service was even better. These girls work together to keep tables happy and they check up on you but don't bombard either. This was my first time there. I'll definitely be back!

Don't buy just bar-b-que meat at ironhorse on 49 North they charge you extra for the sauce. But tell you when you order it they will give you some!!!!!

I got a fish sandwich it was ehhh ok

Their burgers I say are better than the bbq

Great food and service a must stop.

Stopped in for sodas. There bbq is pretty good!

They advertise catering, but apparently they don't want to do that business... We called for them to cater our wedding, on six separate occasions with no return call... That's extremely bad business!

Food was good I had a steak . Wasn't the best tasting steak but it was fair. Grandkids loved there meals

07/16/19 I was in this store this afternoon and was shocked and humiliated by the young man who was checking me out. I did not get his name because I was still in disbelief at how this person treated their customers. I was checking out and decided to use my debit card since I did not bring any cash. My total did not come to $5.00 and was told by the young man that there would be an extra 30 cent charge. At that time I did not understand the reasoning and was asking him why would there be charge and he looked at me and said to me, " I need you to stop yelling and if you can't stop yelling , you will have to leave the store." I looked at him in shock. My friend that was with me actually turned around to see if he might have been talking to someone else. I was so embarrassed because there were several other customers in the line behind me. I told him I was not yelling, I only ask what the reason for the charge, again he told me to stop yelling. I ask to speak to his manager, he went and told his manager there is a crazy lady at the register yelling and she wants to speak to you. I am not the only one who heard that. The manager did come out and I told him I had never yelled at anyone. I treat people with respect. I am thinking to myself, why would I be yelling anyway. The manager was very nice and I explained to him that I never yelled, I am sure if I had, he would have heard me, he was not that far away. So, apparently the owner can charge a surcharge if your purchase does not total a certain amount , which that is fine if that is the case, because I have the option to decline. I have been in that store on several occasions and have never been told that and I know I have spent less than $5.00. I have never had any issue's either. If they have a video camera setup to record the register and store, I would love for that to be watched. More customer service training is needed. I wish there had been neg. stars offered because giving 1 star is to many.

It was OK but not all that. Definitely better BBQ places in town in my opinion.

Best coleslaw around! The the nachos.... Yum!

All around awsome food service price every thing.

They have some really good BBQ, friendly, and cigarettes n gas are reasonable.

Has the very best pork steaks you will eat. You will only need a plastic fork to cut it up, a must try for barbecue lovers

Great bbq steaks. Tender enough that you can actually use plastic utensils to cut and eat them.

Get the heart attack breakfast samich

The food was incredibly delicious. The service was great highly recommend this establishment for great dining!

The food here has took a nose dive since the opening of the steakhouse. I mean how hard is it to get a baked potato right.

Great place to eat breakfast, lunch, dinner! The fish is really good, the service is great!

I defy you to find a better piece of meat and I'm not just talking about quality of me I mean The Taste the texture tenderness pork steaks you can literally cut with a plastic fork that's no exaggeration if you don't believe me try yourself. Combine all this with some of the best seasoning methods I found in a long time it makes for more than most enjoyable pieces of meat I've ever put in my mouth even the sides are amazing.

Great food at this place.People have a great personality and it's the best barbecue I've had in awhile.

I really enjoyed this place until they got cheap with the condiments. Got a 5 piece fish and almost had to beg for Tarter sauce. Girl gave me 1 packet. Made her give me 4 more.

Food was so bad I couldn't eat it. Got bbq fries tasted horrible. Literally throughout the food.

Best food ever!!! Loved it will alway great food.

BBQ is good. They have ribs which I've yet to try.......half a chicken is a good menu option. Sauce is sweet but more vinegar based than other bbq restaurants in town. They also offer steaks but i have yet to try. Overall one of our better bbq joints!

Dang good BBQ. However, when ordering carryout, keep in mind, your fries will be soggyvwhen you get home. They suck up the juice and steam from the meat. Still taste good, though. Pork steaks are muh favorite.

Their pork steaks and ribs are delicious

Great atmosphere top notch service the food is great. I love it here and plan on going back

Had the ribs and I was so happy with the meal

Food is amazing. Proportions are worth the price. When you are there, that at home feeling is definitely there. Staff are wonderful people. Treats everyone like family

The food is amazing abd so is the service.

The food is good. THE STAFF IS AMAZING!!! FAST!

The best BBQ in town!

I eat hear alot,love there hamburgers and there steaks both are mouthwatering to eat. The staff are always friendly and smiling.

Always stop here when I deliver to utility...pretty good food. Had their chicken fajita nachos last night; best fajita nachos I've had In a while. Just add their BBQ sauce to your taste. Friendly staff and good pricing.

Good barbecue and burgers, they have excellent fish as well. But the people and staff are friendly and down to earth!!!!

The prices are just right! I love going here when I'm in town. The hostesses are nice, kind and helpful when I can never make up my mind on what to order. The food is to die for! Tender meat bathe in sause just makes you just want more! It's better than fast food joints and you can get it on the go!

Love the food and service is great.

Food was excellent, bathroom was disgusting. I would have given it 5 stars except for the bathroom, which was like something in Mexico. Clean it!!!

I have worked here 9 years and its a very friendly atmosphere.

Such great food and the customer service is excellent!

Their steaks are AWESOME!!

Cater is excellent. Food is good at restraint also

Why does BBQ take so long to serve? Ironhorse was good food but my question is a general pine to all BBQ joints. The food's done, I'm the only one in there...WHY does it take so long to slice, chop, and or pull to make a plate of Smokey goodness!?

BBQ was dry, but it was about closing time & just wanted to sell it. They could've explained it was old. The fries were hot and excellent. Glad that refills were free, because cups were small.

cool LPS and Friends especially you

The food was excellent and the cashier was very kind. Also, the prices were good and portions large. You can't go wrong with the pork steak and my picky kid loves the chicken strips.

Thier smoking needs alot of of word the food had little to no flavor.

I've been going there for a long time great food

Awesome ♡My Husband and I stop by as often as possible. There Bar ~B~Que Baskets

The food is great

The food is good. I would recommend going on a Friday or Saturday as that is their fish day. Staff always friendly and helpful. Store is clean and so is the bathroom. Service always A+!!!! 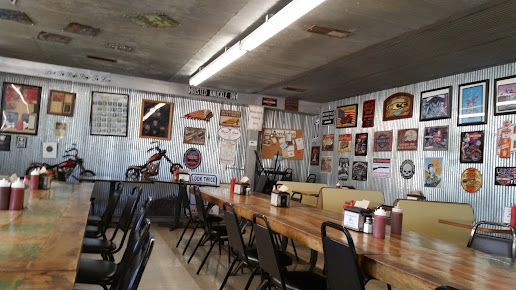 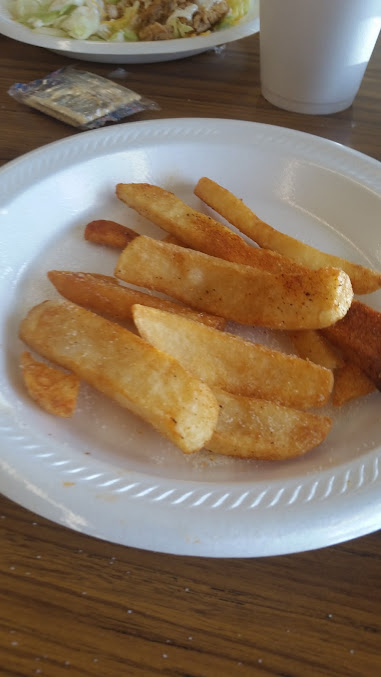 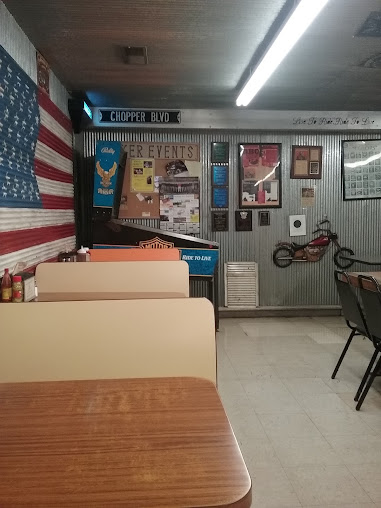 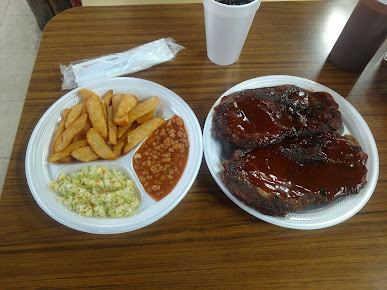 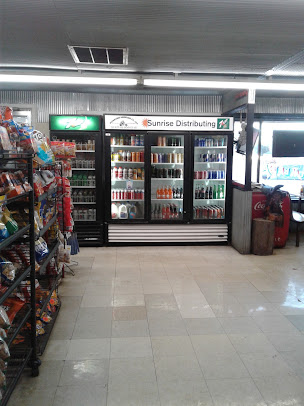 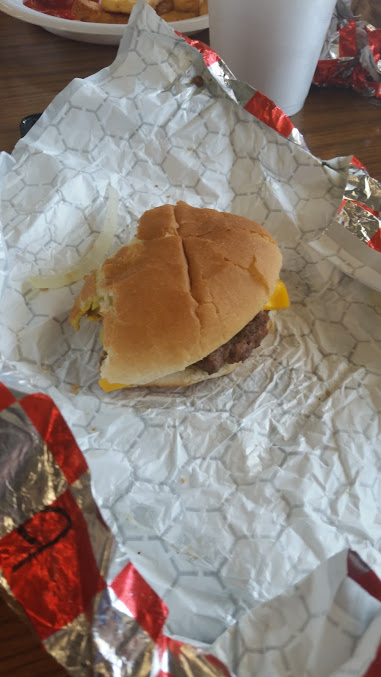 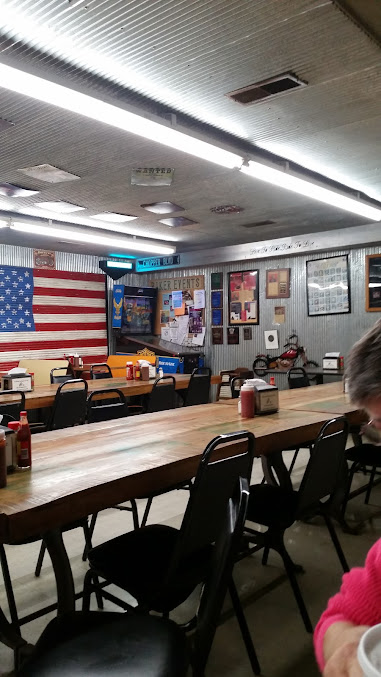 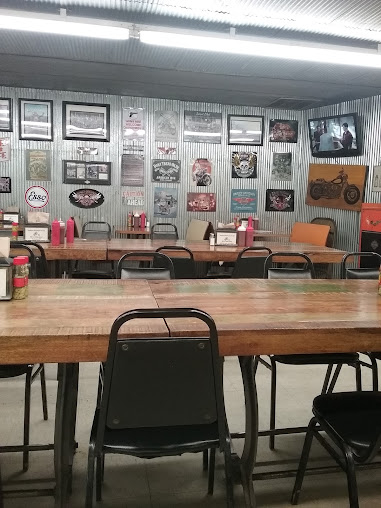 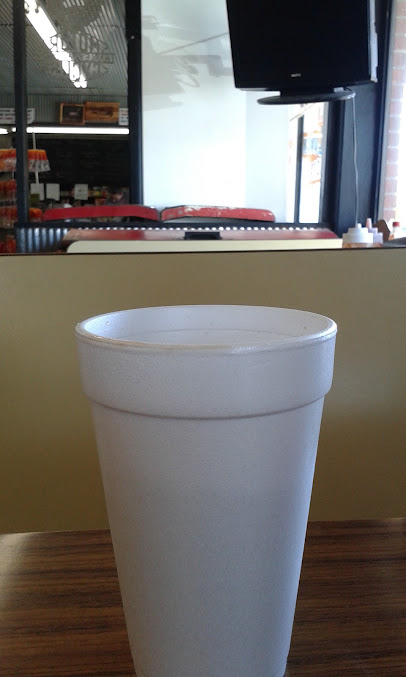 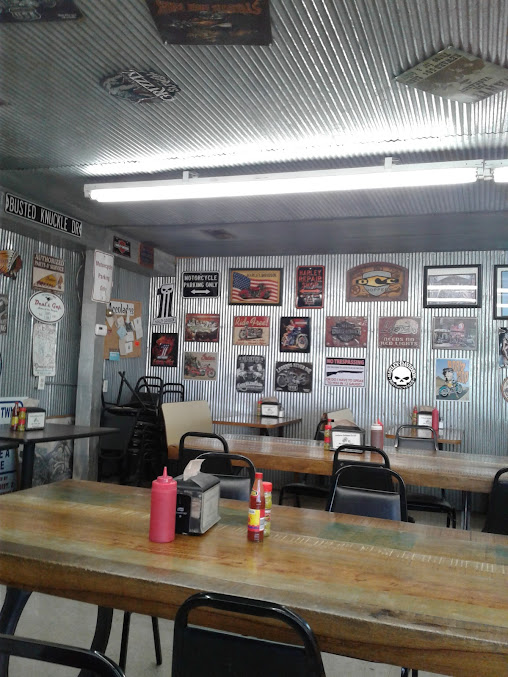 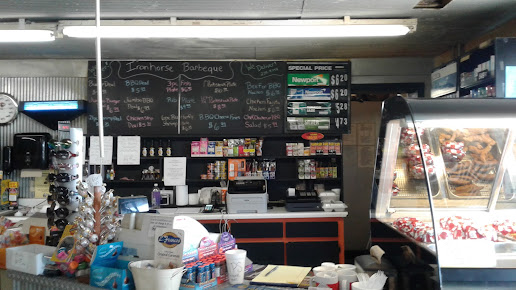 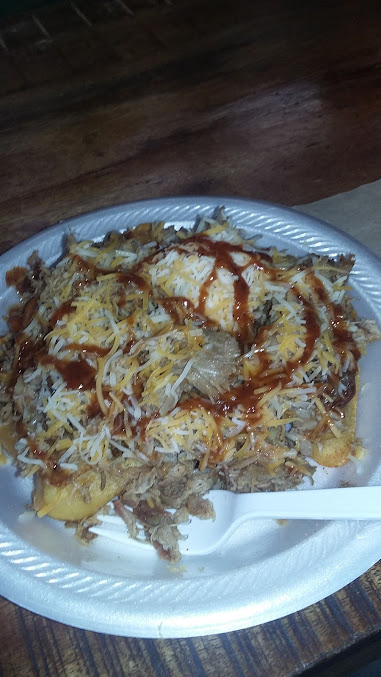 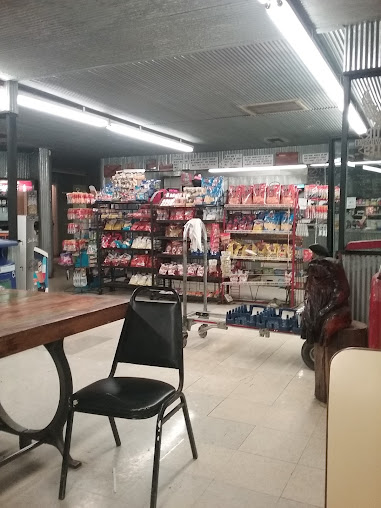 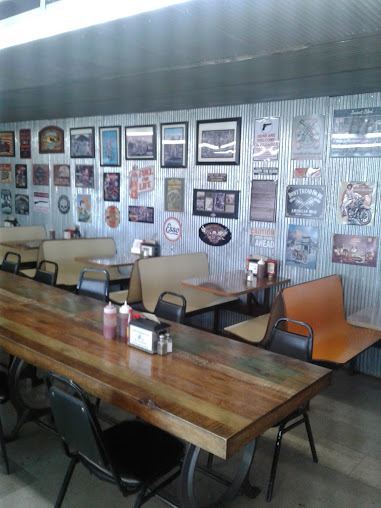 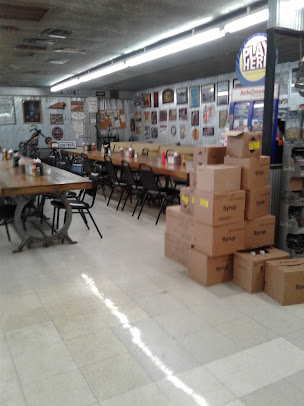 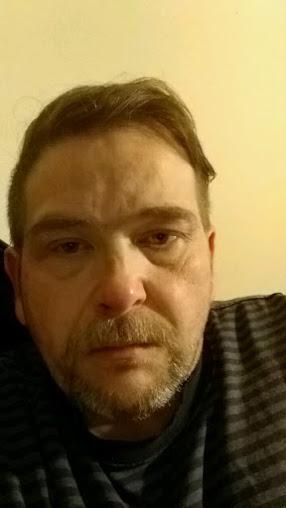 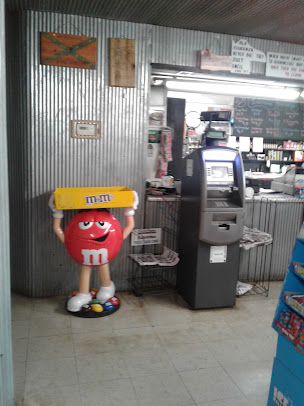 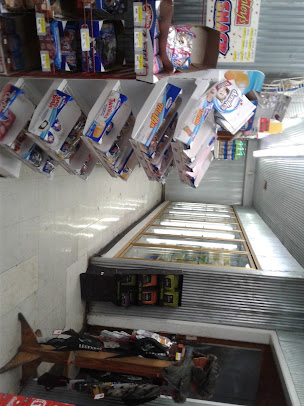 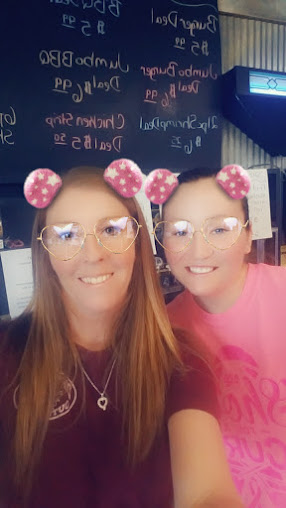 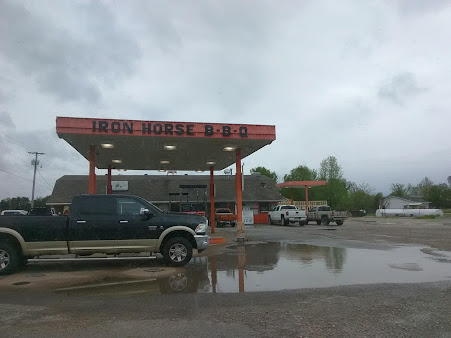 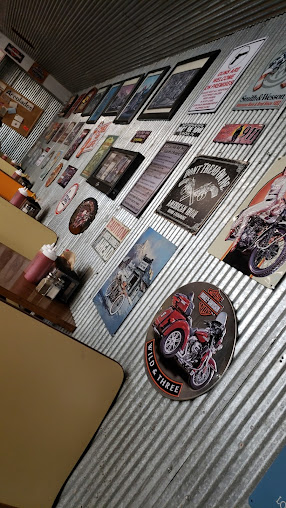 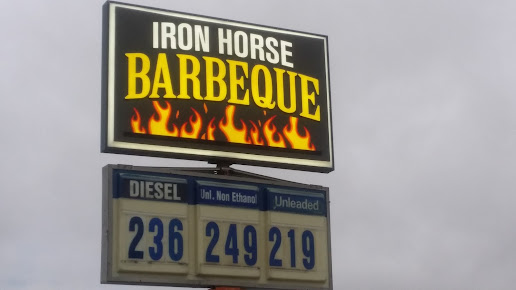 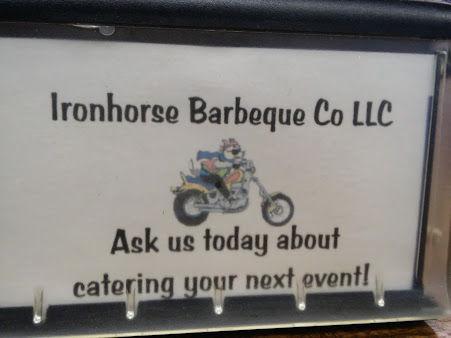 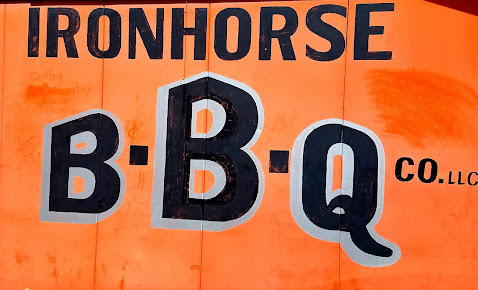 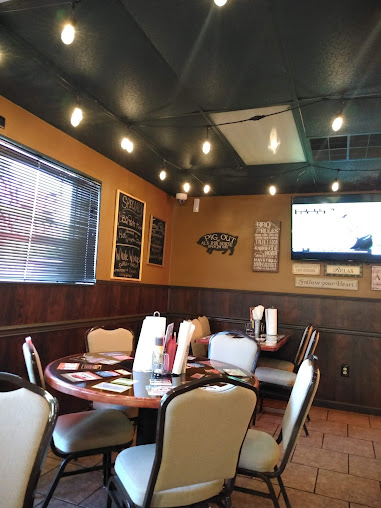