You will see the information of real people who bought the products and services of Fort Hill Bowling Center (Bowling Alley) in Virginia.

Right now this firm receives a rating of 3.8 over 5 and that rating has been calculated on 62 reviews.

You must have seen that it has an average rating is positive, and it is founded on a very high number of reviews, so we may conclude that the score is quite accurate. If many people have bothered to leave their feddback when they are pleased, it works.

You know that we don't usually bother to set scores when these are good and we usually do it only if we have had a problem or issue...

This Bowling Alley corresponds to the category of Bowling alley.

Where is Fort Hill Bowling Center?

Had a great time bowling with friends today.

Its a great bowling alley. It doesnt have fancy lighting or anything crazy but its the better place toctake friends have a pitcher of beer and have a good time. The only issue is they dont play music, it requires a customer picking songs to have background music. Great place tho.

The system was extremely outdated, and the lane that my group used kept breaking down or failing to return the bowling balls. The staff had bad attitudes when we asked for assistance when the lane jammed. By the time we got through our first game, we could have easily played two. We'd initially payed to play two games, but decided the frustration of waiting and talking to the staff wasn't worth it. We asked if we could have a refund for the second game that we didn't play since the lane needed to be fixed, and we were just told "no." The prices may seem cheaper than other places, but I would have happily payed a few more bucks to have a better experience.

Its fun and a nice place

Cheapest place around if you know when to go

This Is An Excellant Place To Bowl! Very Cool Staff & Great Prices! Only Downfall Is You Have To Reset The Lanes Everytime The Ball Is Rolled!

Worst experience ever I paid for 4 games and only got to play 3 and they didn't even refund me . My whole group paid for 4 games a piece and none of us got to play the games we paid for and when we paid she could have told us they closed at 11 instead of charge us for four games and only allowing is to play 3 of the 4 games . We constantly had to hit the reset button . Very rude poor customer service me and my friends will never go back .

The workers were so rude!!! and the frames weren't reading right! Won't ever go back and if you want to have a good time go to another bowling alley!!!

This bowling alley is in extreme need to be updated to the 21st century. Between 50-60 percent of the time you have to reset the lanes between times bowling. Also, some of the in house balls repeatedly kept getting stuck in the ball return and had to get unstuck every other frame. The price to bowl is amazing ($10 for 3 games) but you get what you pay for in lack of keeping up with the times in regards to technology and service and professional of the employees. The claw machines here were also not set up to distribute prizes fairly due to the fact that the prizes were too big for the claws. I am giving it two stars for the fact that the food here was decent. I would recommend going to AMF bowling if you have a desire to bowl.

Nothing wrong with this bowling alley. Very clean. Did not find the alley had any offensive odor as one comment I read. There is a smoking room but I did not smell the smoke at all.

Their equipment is very old, and doesn't function as it should. Constant jamming lanes and non synchronized scores. Staff wasn't rude, but you could definitely tell they'd rather be anywhere else. Food was okayish, they don't offer free refills on fountain drinks.

It was early in the evening and my cousin, brother, and I decided to hit the lanes to work on our game, even though our game hardly needs any work. (We consistently bowl 200+) . Upon entering, we were greeted with the repulsive combination of cigarettes, dirty pits, and freshly donated plasma. Despite the fowl odor, we decided to stick around due to their solid deals. We of course started extremely hot, my cousin rolled a turkey early to set the tone, but soon after my brother rolled a rare gutter ball. We didn’t roast him too bad for it, we haven’t played in months, so hey it happens. However, his ball unfortunately got stuck, (I kind of got the idea that this happens often at this alley, given the ancient/rusty lanes) so we decided to gently toss another ball down the gutter to push it out, this is very standard procedure in the beautiful game of bowling. We pushed it out, and began to adjust our scores accordingly , when suddenly an employee who resembled a character you’d see on Beavis and Butthead came waddling over telling us to leave. We were speechless, we were kicked out for playing the game the right way. The smell of cigarettes and dirty pits will haunt me forever after my first and last experience in the “bowling center.”

Great every time, my only complaint is about the minimum credit card limit.

Def the lesser of the 2 boeling allies of Lburg. Little bit better prices. Could use a face lift. Beer is also cheaper.

Place is great Parking lot is dark and scared. I would not bowl here at night without a group.

I was there at the Grand opening in 1978, my pictures are still on the wall with Cyline Barker, Miss Virginia!!

It's outdated sure. But the workers are nice, and very helpful. I had a lot if fun bowling with family and friends here.

great place to bowl and not break the bank doing it, nice people.

Cheap and fun place to bowl smells like smoke

Women working the Bowling Alley was beyond rude. We have been the last 3 weekends but will not be back because of her.

Cheap bowling - place could use some remodeling - very outdated

Fun place to bowl and cheap, but could be updated

have great deals for bowling, but prices for Beer n food are ridiculous. make sure you eat before or after you bowl. don't even have free refills on sodas

This place was terrible, both times we’ve been (months apart) have been ridiculous. We literally had to press the reset button every time we sent a ball down the ally - and sometimes the balls got stuck and we had to go ask them to retrieve it for us....I mean multiple times. It took us over 2 hours to play 1 game bc of this. Will not be goin back - especially bc it cost the same as AMF which has better equipment. 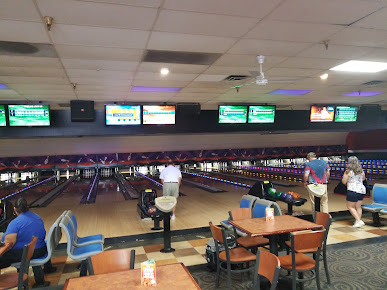 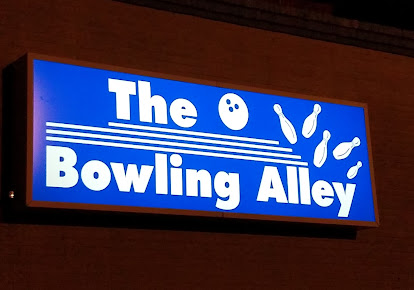 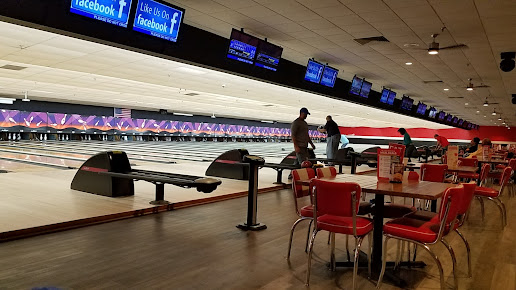