Here we offer you all the reviews of people like you who buy the products and services of Fast Lanes Bowl Inc (Bowling Alley) in Oklahoma.

As you can see its rating is virtually the best one, and it is founded on a large number of opinions, so we can conclude that the score is quite faithful. If people have bothered to value when they've done well with the service, is that it works.

As you know, we do not usually bother to put feddbacks when these are good and we usually do it only if we have had a problem or incidence...

This Bowling Alley is included in the category of Bowling alley.

Where is Fast Lanes Bowl Inc?

I go there every Sunday!!

A great place for family and friends to get together and have a great time. They also have some of the best food in town.

Played pool and games, had a good time

My boys loved it

Small but fun place. Food and drink are a little pricey.

The atmosphere was fun and pleasant, however there was only one staff member and the place was moderately busy. We ordered food, which was actually pretty good and went to pay with a debit card however she said she only takes cash. That's fine, but there were no signs that she took cash only, there was an ATM there, however it was broken. So my husband had to leave to get cash. The staff member wasn't very friendly or helpful in the beginning, however she did eventually warm up and assisted us several times with a smile.

My husband and I always enjoy going bowling here.

The alley itself was fairly average, not to say that is a terrible thing. It's expected for the area. However, the staff that I've encountered on both occasions while bowling here were very unwelcoming. They created a very uncomfortable air, to the point that I dreaded every time I had to go to the counter to buy additional games. I would have thought I was asking for the short off their back. They also have very few balls and seem to make no effort to keep them in any form of order. 2.5/5 at best. I'd go again because there's nowhere else near me to bowl, however I wish it was a more exciting experience heading there as opposed to dreading facing the counter staff.

I had a party scheduled for today and found out three hours before my party that they had no electric. This party was for my granddaughter who had never had a birthday party. Due to the kindness of the Eufaula Indian Community we were able to use their facility. The owner and staff of this bowling alley drove to Eufaula with the cake, games, music and party supplies. Due to their diligence and kindness a wonderful party was put together in three hours. The staff and owner were amazing and if we had booked it anywhere else we would have been told to just reschedule ! This kindness and expertise with children was truly appreciated ! Please if you want to book a party consider them first ! Thank you to all of you that made this a wonderful day!

Really friendly and helpful staff .we where pleased with the customer service . They trying to help you out wherever they can . We do appreciate everything you guys did in a this short time . Keep up the great work . We defently will be back .

Excellent staff and Boeing. Great birthday for our 3 yr old! So attentive staff, even helped the kids bowl!

It was good. Not bad at all. Clean and friendly

Not to many people

Wasn't expensive and friendly people we enjoyed our time there

A little expensive, but a really fun place!

Took my girls here and on spring break. The bowling alley was clean and nice. We had a great time.

Fun place to go with family and friends!

We always have a good time there. The people are nice and the food is good

Great place to go with friends

This is such a fun place. Not only do you get arcade games and bowling all in one place, you also get great food at great prices. They've got one of the best burgers in town!

Haven't been to many alleys but it's friendly and clean.

Don't respond to you after filling out a app

For the kids only

Great fun for all people

You know I really like bowling here. I have grown up helping around here and if it wasn't for this bowling alley to be here in Checotah, OK than Checotah probably wouldn't have anything fun for us kids. I come here a lot, I learned how to play pool here. They have people that come in to bowl and sometimes they won't have a ball to fit them you know what they do? They find one and later on they will order new bowling balls. If people don't like it, think about it they pay for a lot of things to go in this bowling alley. Recently they actually put in new glow bowl lights and also a fog machine. It is really amazing what they do for this bowling alley. If you have been there and had a bad time then maybe instead of just not likeing it, maybe you should just give it another chance. If you haven't been there yet than you should go and give it a chance. You will have a lot of fun there. I love Fast Lanes bowling Center

Awesome place for a party, great food and Lori will help you plan your event to perfection!

Cool, clean and fun for the whole family!!

There’s a total of 12 lanes and it was only $18 for an hour of bowling plus Shoe rental had a great time with our church activitie.

Very pleased with the atmosphere and how well they took care of the kids that attended the bowling birthday party!

Clean, friendly, family entertainment. Staff goes out of their way to make sure bowlers have what ever is needed.

Service was great. The food was good. And it was clean.

They did such a wonderful job with my sons party I was very impressed! Two big thumbs up

We love our local bowling alley. They are very great at welcoming kids. Taking kids never feels like you are unwanted. Food is delicious even if you don't just want to stop in for lunch.

I had a birthday party there and the food and decorations where great I hope to go there again.

When I had first called to discuss having my sons birthday party, the man on the phone said they make it stress free for the parents. they do set up, clean up, provide kids with a meal, help with serving and they provide the cake. All I needed to do was bring candles and the kids. He said the cake was not a wal-mart cake, it was better. (Having used wal-mart cakes in the past and been very satisfied with their cakes, I was expecting an outstanding cake!) I had also discussed about having young children at the party and he said that they had a ramp the kids could use to help them with bowling. They were way understaffed for having multiples party booked. I had to ask about the ramp for the young kids and was told at first that they didn't have them. After explaining the man on the phone said he would have one, the young girl said they only use them for the handicapped. I again told her what I was promised on the phone, she then asked another coworker. The ramp was eventually brought out. The same young girl brought out the food and drinks on a big tray and laid them on a table and as she walked away she pointed and said "that's your food." I looked around and there was no one around to help serve, so I served the children by myself. The cake was average. It was not decorated nor tasted as good as a wal-mart cake. There was a picture of a train cut out and placed on top of the cake and had M & M's around it. The whole cake was white with black lettering. I was told it was going to be blue and a gold, yellowish color ( I had called 2 days before the party to inquire about the cake.) However, the two men did help with cutting and serving the cake and ice cream. They were friendly. Did the kids have fun?..... yes they did. From a parents point of view, it wasn't worth the money. It was not stress free as promised. The cake was way under par and the young kitchen staff was not very friendly. Had they had more staff they might of been able to accommodate as promised.

Great alley!!! Was super surprised with the bowling experience. Upon arrival I second guessed myself on this place but the interior is immaculate and fueld by a friendly staff. Though this place may never cross my path again...I wish to gutter their lanes again someday. They have beer as well.

I love the homeschool league

My favorite place to be in checotah. Good pro shop there as well if you want a ball they will fix you up for a good price. 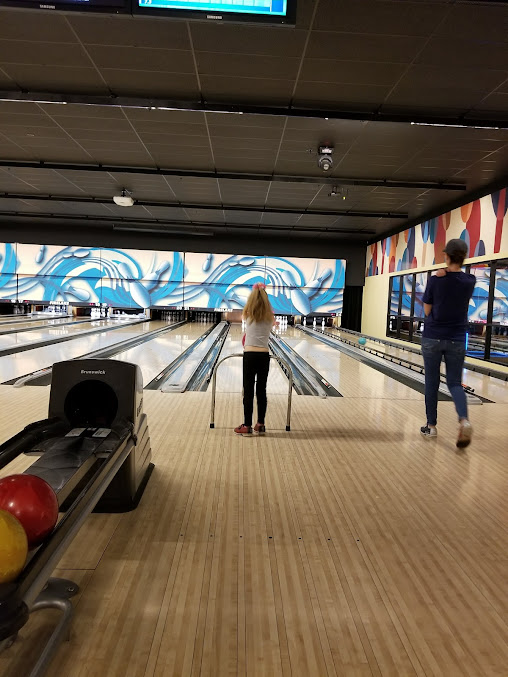 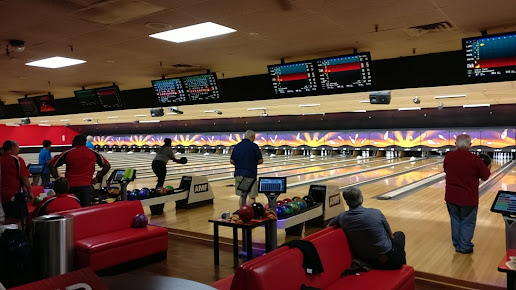 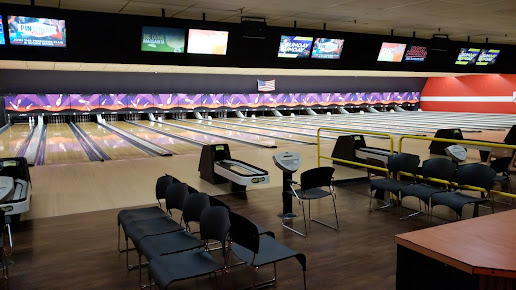 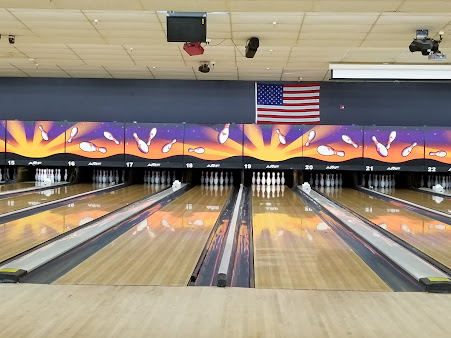 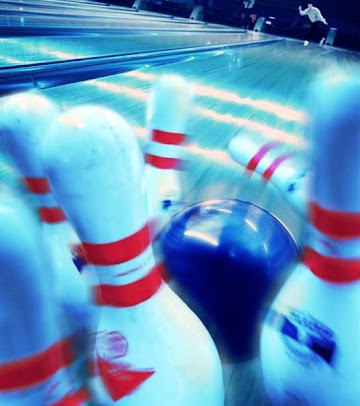