Here we offer you all the reviews of real people who are buying the services and products of Michelle\'s Gourmet Pastries & Deli (Bakery) in the state of New Hampshire.

At present the firm has a score of 4.4 over 5 and this score has been calculated on 54 reviews.

You may have noticed that its rating is really good, and it's founded on a very high number of scores, so we can think that the evaluation is quite faithful. If there are many people who bothered to rate when they've done well, is that it works.

You know that we don't usually stop to give feddbacks when these are positive and we usually do it only if we've had a problem or incidence...

This Bakery is classified in the category of Deli.

Where is Michelle's Gourmet Pastries & Deli?

Love their turnovers. Also the cinnamon rolls are pretty good. Sometimes they sell out of the pastries I like.

Their cakes are so delicious and perfect! Recently it was my 1 year olds birthday. I believe we ordered the chocolate raspberry and the cheesecake red velvet cake. Both were so delicious and the best part is we had leftovers. The person I talk to on the phone was friendly and they were able to have my son's name written on both cakes wishing him happy birthday. And I was ready to pick both cakes before the party started. I would definitely recommend Michelle's to a friend. I would love to order from here again in the future.

I’m so glad I found Michelle’s! I was looking for a bakery that could make a tiramisu cake with 24 hours notice for my dads birthday yesterday, and they happily did it! It’s a tricky time of year because of how close Christmas is. When I went to pick the cake up, I was blown away at the big selection of cakes, cookies, and pastries. I couldn’t leave without trying something, so I got a whoopie pie and and 2 chocolate cupcakes. Everything, including the cake was absolutely delicious. The cake was so beautifully decorated and worth every penny! I will definitely be coming back here for cakes and pastries. Don’t let the outside fool you, the inside is big and really awesome. Thanks, Michelle’s!

Michelle's is a treasure of a bakery tucked away in a quiet neighborhood on Manchester's North end. They have a broad and excellent selection of pastries, cakes, and treats (though be advised, not a donut in sight). I've brought their cheesecake to a number of events and it always gets rave reviews. The staff is friendly and helpful. Their decorated cakes are absolutely gorgeous. And the lunch items are also amazing. The Works, their chicken salad, the italian, all served on a french roll...so delicious. The New England clam chowder was also incredibly good. OH Almost forgot that their breakfast sandwich on a whole grain croissant was to die for. I can't recommend this place enough.

I was really counting on this cake, which I ordered for my daughters bridal shower, to be fabulous, seeing I had heard such great things about Michelles Bakery. I was very sadly disappointed. First of all, I spoke with two different people before ordering the cake. The first person I spoke with, when I called to get an idea of what I wanted to order, was friendly and helpful. When I called back to actually place the order, I did not get the same helpful customer service. I felt like I was almost bothering the person. Thankfully, I called back and got the original person on the phone (Michelle) and again, she was helpful. No complaints with her customer service at all. My real disappointment was the cake in general. First, I had asked for ivory frosting and was told the butter cream frosting was ivory colored. To me, it was almost yellow. I also asked for really pale pink flowers, but the flowers were a medium pink color at best. I had also asked for black scrollwork along the sides. The black scrollwork was very a very dull black. Overall it was a very dull looking cake and to be honest, I was shocked that there was nothing special about it. When I brought the cake home, my niece looked at it and said "thats it?" She then went out to Michaels and bought some paint on glitter to jazz up the flowers and some black pearls to add to the scrollwork. It definitely helped, but when paying that much for a cake, I wouldnt expect to have to add anything to it to make it look better. I had made it clear both times when I called that I was not an expert in cake decorating and that I was leaving it up to them to make it pretty and special for my daughters shower. Lastly, I was not wow'ed by the taste of the cake. To me, it was just okay. (It was a vanilla/chocolate torte with chocolate mousse.) Half the guests liked it, the other half thought it was okay, but not one raved about it. The butter cream frosting I did not care for at all, and some guests also commented on how they did not like it. The best way to describe it is barely sweet, and having the consistency of shortening. I had never had a butter cream frosting quite that unpleasant. I really had wanted to love this place, seeing there are not a ton of bakeries in our area, but sadly I will not be back. I had a taste testing for my daughters wedding cake at a different bakery and am very happy with that. My recommendation to anyone would be a cake tasting at this shop before ordering!!

Prices went up drastically over one year. 28 bucks for an 8 inch cake, when previously was about 22 bucks. Now you minus well visit a bakery in Bedford.

Couldn't possibly be better! First time ordering a specialty cake for important function, and it was a huge success!

What's not to love?!

Been here a few times and have ordered a black forest cake. Delicious both times. Will be coming back and trying other sweets like the blueberry scones. Great service each time. Heck, Michelle has been their every time we have been their. She has been very friendly each time.

The best butter cream frosting cakes I've ever had.

Great menu Nice staff. A must visit when in Manchester

Michelle's is my go-to bakery! Absolutely amazing!!! I've gotten so many cakes and tortes here over the years and each one has been over the top fabulous!!

Such a cute café with amazingly delicious healthy food!! And some beautiful sweets too.the Baker was packed when I arrived on Sunday during brunch time. There are not a lot of seating inside so you might have to wait for a chair. The middle table is like a picnic table. Then there's two people tables on the side and some high top chairs. There's also a very cute lounge chair area by the window for two people and a small table outside. The menu includes fruit, yogurt, sandwiches, salads and a bunch of pastries in the window display. Everything I ordered was great! I highly recommend this place

Great bakery. We have never been dissapointed with their cakes. Today's was a pineapple/raspberry filling. Yummmmm

Michelle's and team did a fabulous job on our cake, the Cannoli cake was delicious!!!! Thank you!

The tiramisu cake did not taste like tiramisu it was soaked in too much coffee liquor, so much so the cake basically was mush. The frosting was thick and heavy and almost had a fondant like texture. The decoration was decent, but the cake itself was a total disappointment. I would recommend next time they use less coffee liquor in it.

The best customer service ever!!! The ladies here are SO NICE and the cake was delicious. Thank you very much.

This is a great little bakery and sandwich shop. The prices are good, staff is nice and the food is yummy.

Got a black forest cake for my mother-in-law. Ordered it on Wednesday, it was ready for Thursday. BEST cake I have ever had...and it was only 22$. So impressed!!!

*UPDATE* I called the vendor to express my concern (which I usually don't do). Michelle acknowledged the problem and knew what happened right away. Apparently she used a different brand of ricotta and knew it was not producing a good product. She was very gracious to refund the cost of the cannolis, which I thought was very professional. *** **I purchased a couple of pastry trays with one being a full canoli tray, which I paid extra for. The canolis were non edible. People would take a bite and throw it away. So disappointed!!! They were soggy and bland and didn't taste like a cannoli should. Just gross. The other pastries were very bland and hard. Very embarrassing to have brought these to this function. I will never recommend this place.

Good pastries, hit-or-miss cakes. All the pastries I've had here are great, though not any better than other bakeries in the area (even grocery stores). The flourless chocolate torte is fantastic. But the cakes are hit or miss, so be sure to ask to try a sample first before ordering one. I ordered a white cake with buttercream for my daughter's birthday, and the taste was bland and actually kind of plastic-y... a very odd taste. My friend had ordered a cake with raspberry mousse filling from them that was fantastic, so she later got a chocolate cake with chocolate frosting for her son, and it didn't even taste like chocolate AT ALL. It also was very bland and plastic-y. The family called it "gross."

I have gone here for lunch while in the area and I have to say the Turkey sandwich I had was awesome! Just the right amount of turkey, mayo, lettuce, tomato, salt & pepper. I don't like things too fancy. But what tasted even better was their potato salad! WOW! I don't know how they get their potatoes cooked perfectly but I want their recipe! The customer service was great as well. Very nice and I didn't have to wait to be served. I also ordered 2 cakes for my kids graduation parties and they were out of this world good! One had a buttercream frosting to die for and the other had a white sweet frosting that was excellent as well. The fruit fillings she used made the cakes. They added just the right amount of flavor that went well with both cakes. I highly recommend a fruit filling! One cake was a chocolate and the other a combo of chocolate/vanilla. Of course I like the all chocolate one but then I LOVE chocolate! Neither were too sweet. I don't like really sweet cakes. I don't think cakes should be too sweet. Save that for the chocolate bars. I showed her some pictures of what I was looking for and she designed the cakes wonderfully! One was an 'artsy' cake with paint brush, splatters of paint, brush holder and the other was a combo 'gaming' & 'art' cake. She made an X-box game controller to sit on top of the cake and my son loved it! She did a fantastic job! I will definitely be ordering more cakes from Michelle's! PS. try their brownies!

Always yummy and always a variety!

I've been buying sweet treats from Michelle's for decades. The raspberry bar and brownie are my favorites! 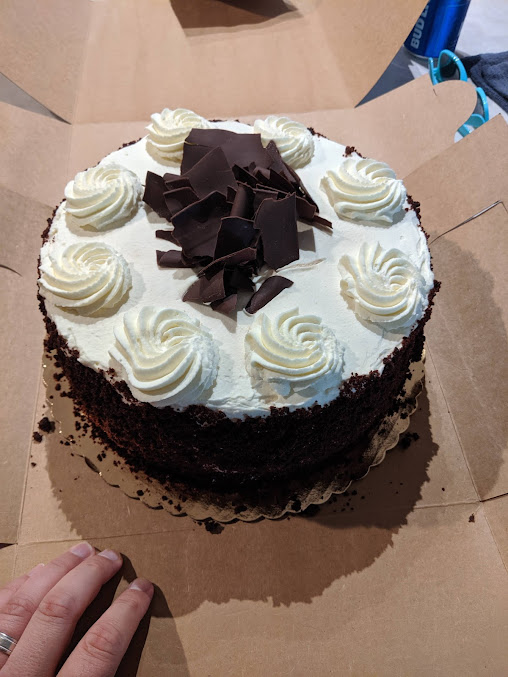 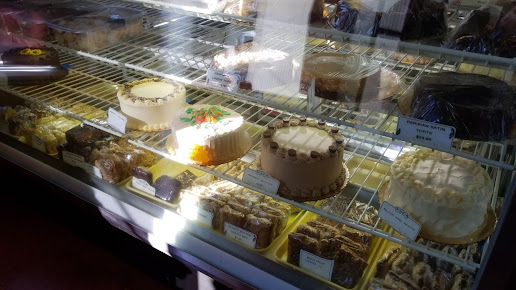 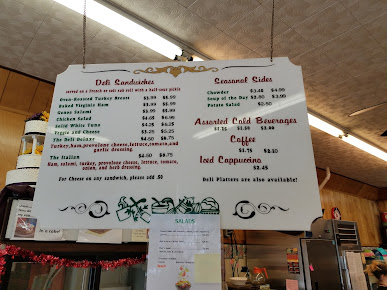 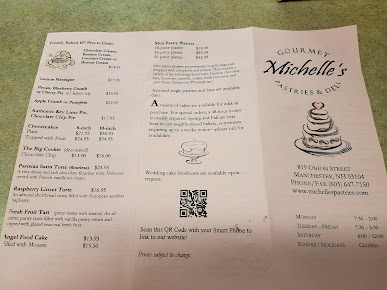 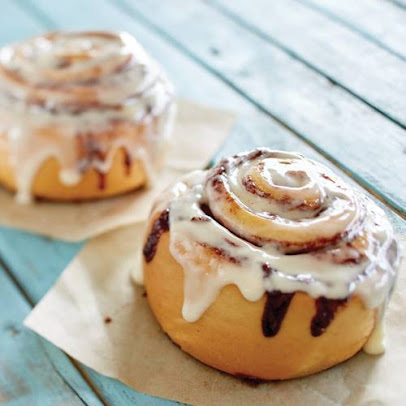 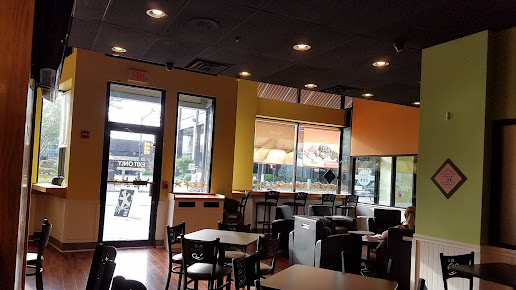 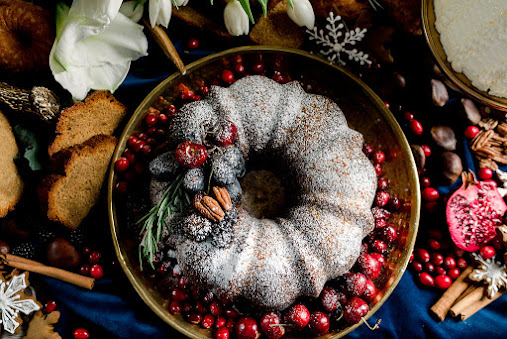 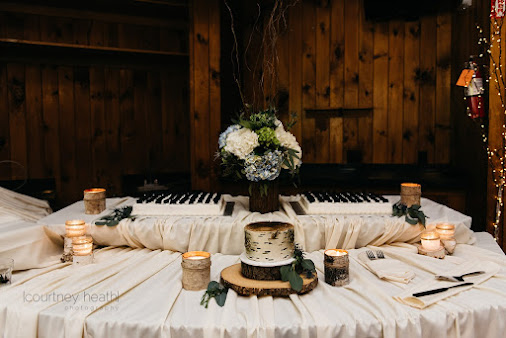 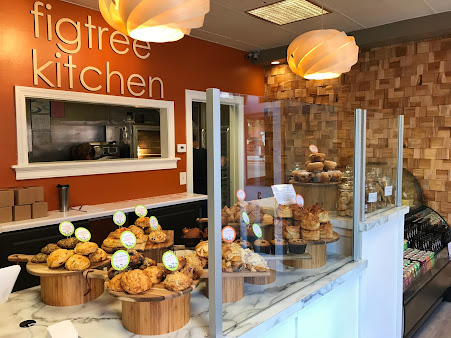