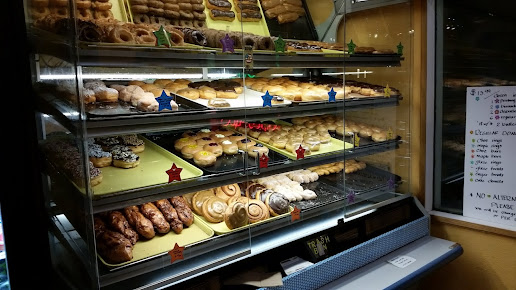 Here you will see the opinions of real people like you who used the products of Donut Shoppe (Bakery) near Alaska.

At the present this firm receives a rating of 4.2 out of 5 and that rating is based on 128 reviews.

As you can read, the average of ratings that it reaches is very high, and it's founded on a large number of reviews, so we can conclude that the score is quite reliable. If people have bothered to value when they are pleased with the service, it works.

You know that we do not usually bother to give opinions when these are correct and we usually do it only if we've had a problem or issue...

Where is Donut Shoppe?

REVIEWS OF Donut Shoppe IN Alaska

Omg I love this place!! The coffee is amazing and the doughnuts make it so much better. The ladies are pretty amazing too. I recommend this place to everyone ❤️

Best doughnut shop, fresh every morning, friendly and a great group of locals congregate for coffee and conversation

Fresh donuts early in the morning

Good doughnuts , but they sell out by mid morning. Horrible rude service.

Always fresh!!! Locally owned, a must see if you decide on donuts, go here!!!

Great donuts, best in Fairbanks. There has even only been one lady working there when I've gone in, she helps people out as promptly as possible. One time I wanted / hoped for a custard filled donut. She was out so she filled a couple for me! Wife went in a couple weeks later and didn't receive the same service, but I'm pretty happy overall!

It was ok not a big selection

Great coffee and a barbershop quartet

How in the hell do you not have a decent donut selection - enough for a dozen donuts - at 8:30 in the morning? The word 'donut' is right in your name.

Best Donuts in the area.

The best donuts in town! Make sure to get there earlier rather than later to get the best choices.

Donuts were huge. Donut Shoppe had WiFi and was a nice place to get some work done.

Stale donuts and really RUDE woman behind the counter.

First time coming here, but man was it great! Good donuts for sure. Will definitely return.

Donuts are good, the lady behind the counter is very short and somewhat rude. Been in several times, always same lady behind counter, always seems to be haveing a bad day! Food good, prices ok, but the service lacks a little something.

The donuts are fresh and delicious

Best doughnuts in town, hands down.

Wish I could be more positive but based on my visit this shop is no better than a grocery store experience. Self serve, cold donuts with limited offering. The coffee was ok. You can likely do better elsewhere.

Good selection of donuts, where surprisingly many of them aren't overly sweer; nice staff, decent enough coffee, and a good way to pass a pajama-morning.

The best doughnuts in Fairbanks!

I like the Donut Shoppe- I find it a nice, unpretentious, place to stop for an espresso and a donut.

They set THE standard for fresh doughnuts made with high end ingredients. 200% better than the Box store flavors.

Awesome place and best donuts I've had in a while

Great doughnuts! More of a cakelike consistency. Get there earlier to make sure you get some though.

The donuts were alright. Neither great nor terrible. The coffee was a bit burnt but i did come later in the day so I'm certain it would taste much better freshly brewed. Most of the donuts are labeled but there were a few that i had to ask what they were. The staff was friendly and answered any questions i had. It certainly feels like the type of place that is more enticing to regulars and/or the older crowd, but as a first time go it was pretty middle of the road. Being there isnt much competition in the area I'm sure i will go back.

Locally owned and family operated, amazing quality and fresh product made daily. My absolute fav. Place for donuts and esspresso. Easy to see from traffic and a comfortable atmosphere for dining in

Has a great variety of

I have gone to get my doughnuts here the majority of my life. When I lived in the states I was extremely disappointed when I tried Krispy Kreme's and Dunkin' Donuts because their doughnuts didn't even come close to magnificence the doughnuts here. Favorites: Bear Paw/ Apple fritter, Bavarian cream filled with Mapel toppings and Cake doughnuts. With this shope, you are getting a much better doughnut then anywhere else. It's worth the price and often the weight. Their staff has always been friendly and understanding.

The doughnuts are great. The customer service is nice, the donut pricing depends on the donuts that you pick.

Went in this morning to grab coffee and donuts for the kids. First and probably last visit. The lady working was extremely rude. Asked for flavor in my coffee and she looks at me and says "umm there's hazelnut cream right there". I told her I can't drink cream and she scoffs and says "ugh ok". She never said another word through out the entire interaction. Customer service sucks!

Best donuts ever. I literally have been ruined for donuts anywhere else

Best Apple Fritter that I've ever had. Do yourself a favor and stop by.

A little disjointed. I like my donuts from a donut shop to be warm and the appearance of being freshly made not all sitting out for self serve. Counter personnel was friendly

The donuts are great but this is my 3rd time coming (and probably my last). The lady working the register is kind of unpleasant and unfriendly. Would not make eye contact. Did not say hello or anything back when I greeted her and then avoided eye contact and made no response when I said thank you. Disappointed.

They sell great donuts and have great lunches. I ate the soup and pork bun.

Great donut selection, but be aware that they open at 6AM. If you come in later in the morning or afternoon, you'll probably notice some flavors are sold out.

8:30 AM doughnuts all cold and staff dismissive. I won't be returning.

The donuts are pretty tasty and reasonably priced. The ladies who work there aren't always the most friendly.

best donuts i have ever had, fresh and tasty!

Best donut shop in town by far. They also supply the hospital and holiday has starting in town with donuts.

All out of donuts but had some nice coffee.

Amazing coffee and doughnuts, I could eat there every day

their donuts are AMAZING

Had fabulous donuts and coffee. But the best part was listening to this man's group sing an Irish blessing to us.

Went to the store and all the chairs were up. The lady said they were closing and it was 2:10pm their hours said they close at 3pm. I bought a donut and a coffee came back 10mins later to get a second coffee and the doors are locked at 2:45pm and the lady is mopping and said she is closed. Ridiculous.

The donuts are always amazing!

YUMMY and get them early. This isn’t 5 star customer service by any means but don’t be put off by the cashier bc she is actually really nice! Great variety and the maple anything is GREAT. Priced good for being in Alaska.

1 DAY OLD DONUTS FOR 6 DOLLARS A BOX!!! If that's the first thing I see in your store it alone warrants me to turn around and exit the store, but when my friend asks a question and you say read the sign when we are the only people in the store that solidifies my decision. Why cant I have fresh donuts 1 DAY OLD DONUTS turn hard and stale from my personal experience and why cant we pick out single donuts??? I foresee this company's business costs exceeding it's profit due to bad service and practices.

Always good, but would like to see white milk offered in a container instead of out of a cup.

Cute, cozy little place. I wish I would go earlier as by 10a seems like they're put of the good stuff. For good reason too, I haven't been disappointed by their donuts.

A real comfort stop, fritter bites are a must have

Best donuts in town. Their glazed donut is heaven.

Good donuts, good price. What appears to be cream sticks to us midwesterners, isn't. No filling inside but still delicious. The big apple fritters were very tasty. Very reasonably priced especially for Fairbanks.

I had a coconut frosted Bismarck this morning. I don't know what happened but that was easily the WORST DONUT I have ever had. Can't get the taste out of my mouth!

I can't remember if I've reviewed the Donut Shoppe yet, so if this is a repeat, I apologize. I've been going to the Donut Shoppe (henceforth referred to as DS) since I got up here in 2016. I personally enjoy the Apple Fritters and the adaptations of the Old Fashioned doughnuts. Unlike Jason's, the DS makes smaller doughnuts in larger quantity and the quality is what you'd expect for a shoppe making doughnuts for AAFES and most of the gas stations in the area. They aren't always consistent in flavor and texture, but they ARE consistently good. They use mainly fruit fillings and custards; no Krispy Kreme styled vanilla cream, which is kind of a bummer. The doughnuts themselves are kinda like Dunkin in size and texture but are lighter and fluffier. The bread itself on most of the doughnuts has a generally sweet taste, yet isn't overbearing. The glazed ones with toppings (coconut, sprinkles, almonds etc.) Do a decent job of having a good ratio of topping to glaze (chocolate and maple are what I've seen) and are pleasant. Overall the food is good for the price point. I think the doughnuts range from $1.25 - $1.75 with the Pershings, Cinnamon Rolls and Fritters being around $2.00. It is worth noting that there is a $5 card minimum. In addition to the baked goods, they also have an espresso bar, small bags of chips, sodas and other "refrigerator" drinks including energy drinks. Lastly, the older lady who works there is pleasant enough if you catch her when she isn't reading or listening to music. The girl who works there on Saturdays...She's pleasant enough but I always get the feeling like I'm keeping her from doing something else she'd rather be doing. Overall, consistent, tasty and reliable are the adjectives I'd use to describe the DS. Definitely worth the time to go if you have a sweet tooth.

Not much of a coffee bar. Staff wasn't very welcoming. Good donut selection.

View Phone NumberPHONE NUMBER: +1 907-455-1267 Call Phone Number
View WebPageWEBPAGE: WE DO NOT HAVE THE WEBSITE 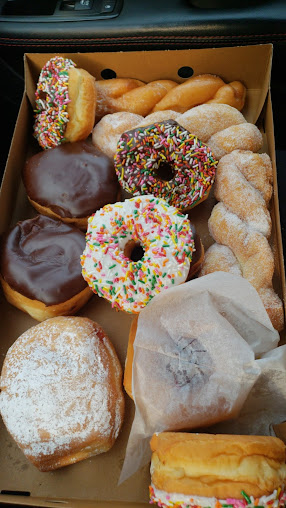 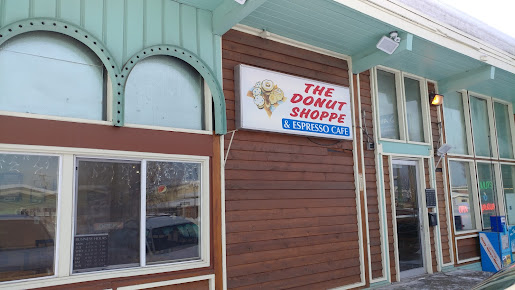 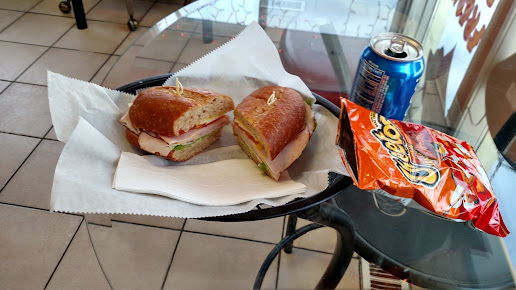 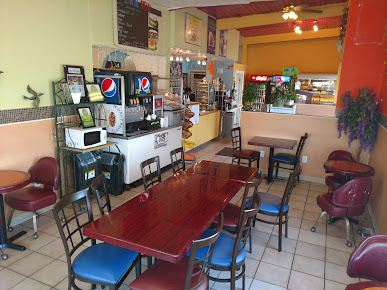 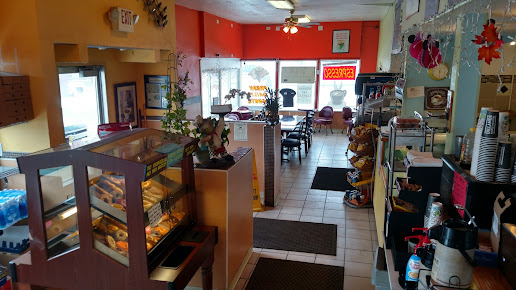 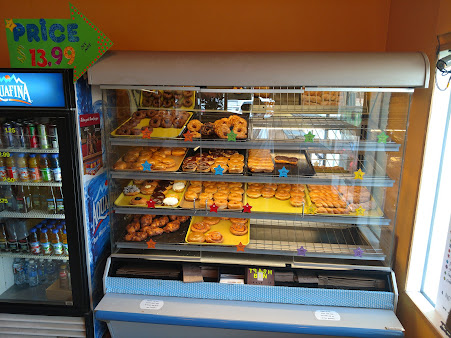 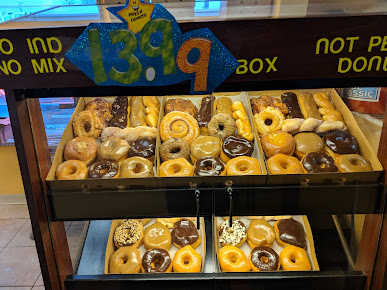 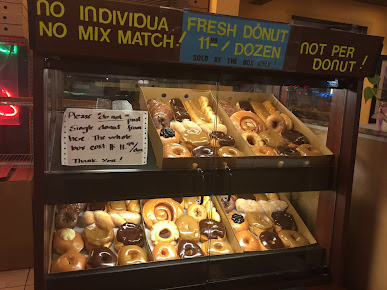 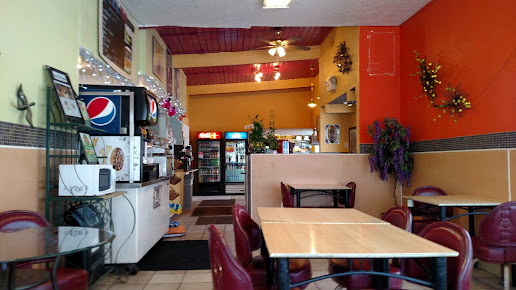 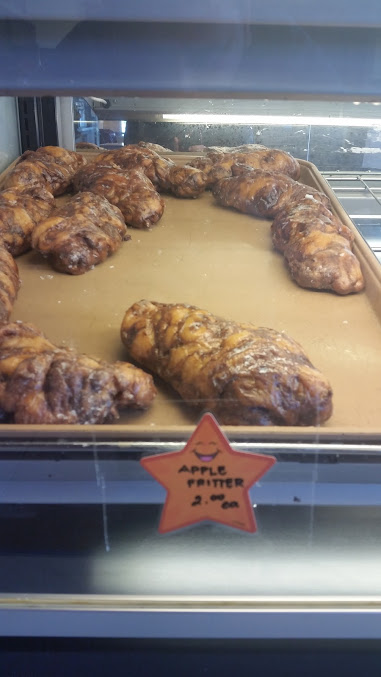 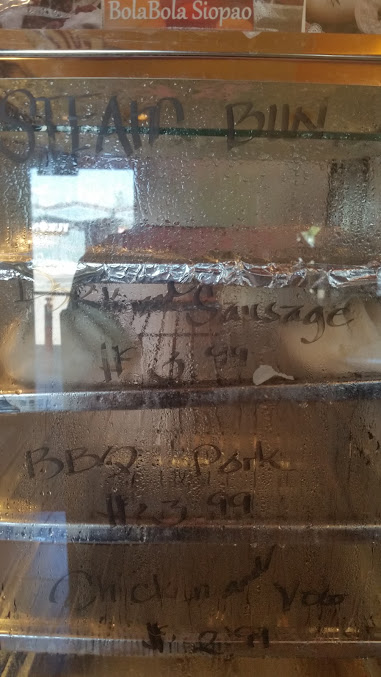 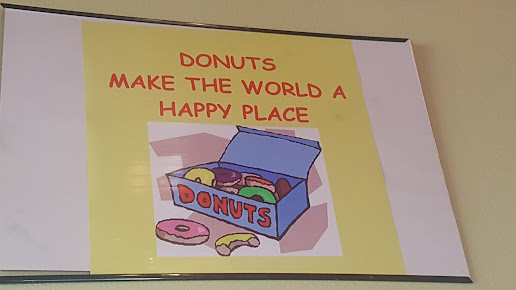 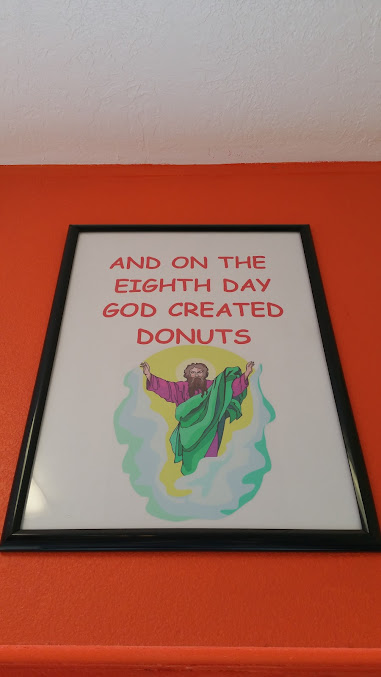 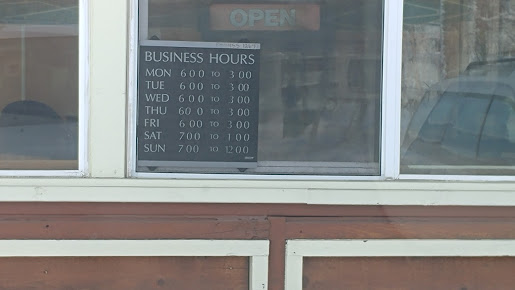 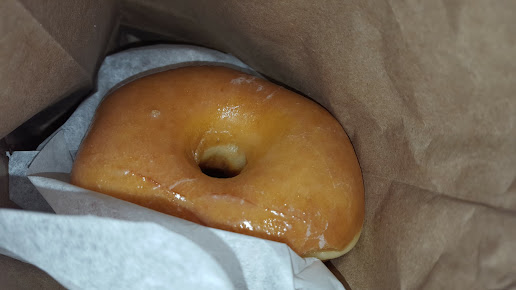 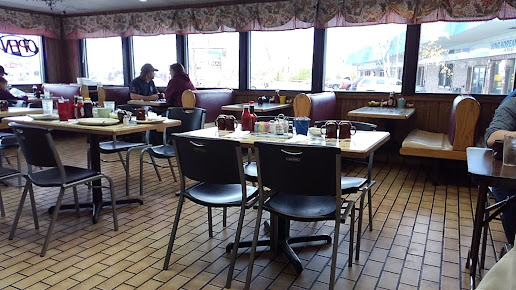 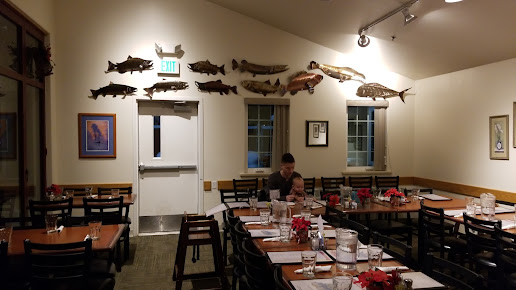 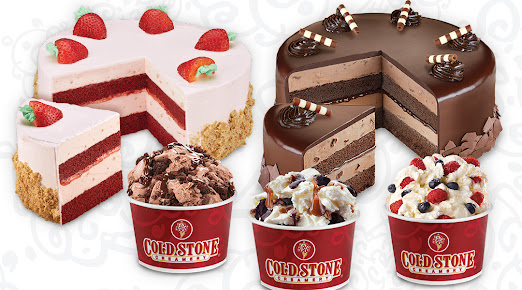 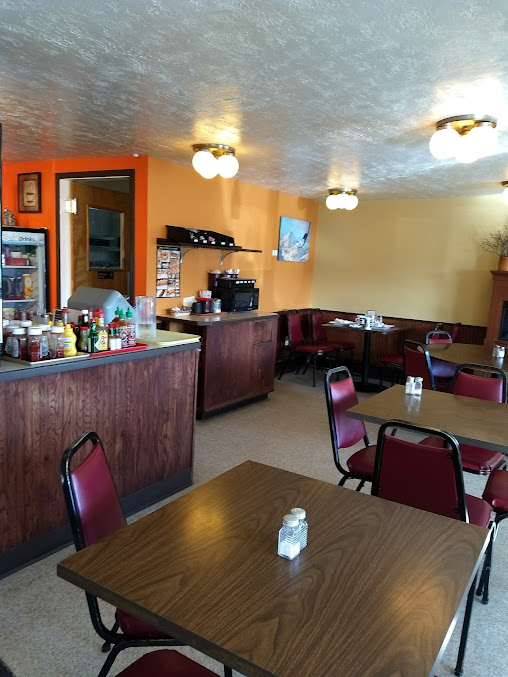